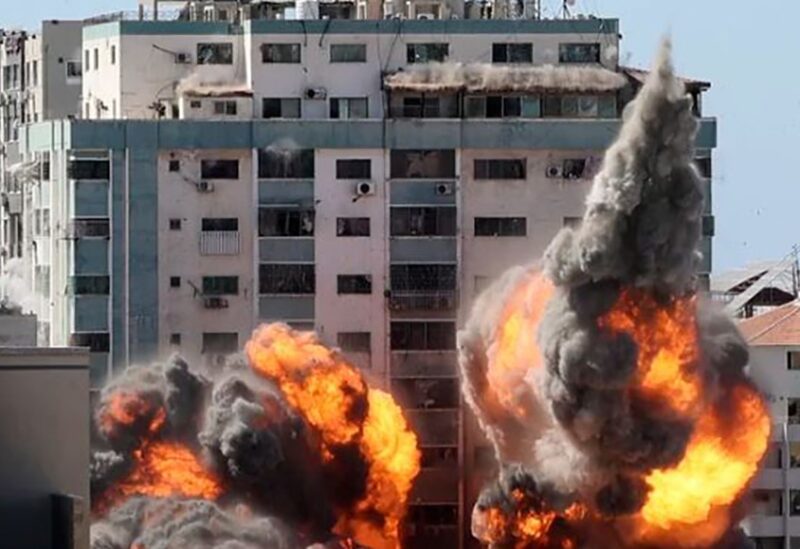 In the early hours of Sunday, Israel banged Gaza with air strikes, destroying a tower block which destroyed a news-making tower, while Palestine activists fired rocket savings in Tel Aviv.

The United States told Israel that it “is a primary responsibility for the safety and security of journalists and independent media,” Jen Psaki, Secretary of the White House.

U.S. President Joe Biden later spoke to both the Israelis and Palestinian Prime Minister Benjamin Netanyahu in an attempt to restore calm.

However, both Israel and Hamas insisted that they would continue campaigning, and not stop hostilities in sight despite a meeting of the UN Security Council on the worsening outbreak of Israel-Palestine violence in years to be discussed on Sunday.

Netanyahu said in a teleview: “The party that blames this confrontation is not us, it is they who assault us.

“We’re still in the middle of this operation, it’s not over, and it will continue as long as needed.”

Netanyahu said Israel’s air and artillery barrage had eliminated dozens of Hamas militants and taken out “hundreds” of the Islamist militant group’s sites including missile launchers and a vast tunnel network.

Hamas began its rocket assault on Monday after weeks of tensions over a court case to evict several Palestinian families in East Jerusalem, and in retaliation for Israeli police clashes with Palestinians near the city’s Al-Aqsa Mosque, Islam’s third holiest site, during the Muslim holy month of Ramadan.

Speaking to crowds of protesters in the Qatari capital of Doha, Hamas chief Ismail Haniyeh said on Saturday the fighting was primarily about Jerusalem.

“The Zionists thought … they could demolish Al-Aqsa mosque. They thought they could displace our people in Sheikh Jarrah,” said Haniyeh.

Hamas, Islamic Jihad and other militant groups have fired around 2,300 rockets from Gaza since Monday, the Israeli military said on Saturday. It said about 1,000 were intercepted by missile defences and 380 fell into the Gaza Strip.

Israel has launched more than 1,000 air and artillery strikes into the densely populated coastal strip, saying they were aimed at Hamas and other militant targets.

The bombardments have sent columns of smoke above Gaza City and lit up the enclave’s night sky.

Earlier this week the International Criminal Court’s chief prosecutor, Fatou Bensouda, told Reuters the court was “monitoring very closely” the latest escalation of hostilities, amid an investigation now under way into alleged war crimes in earlier bouts of the conflict.

The New York-based rights group Human Rights Watch said on Saturday it had “serious concerns that the attacks caused disproportionate destruction of civilian property” in Gaza.

Biden’s envoy, Hady Amr, arrived in Israel on Friday, before a meeting on Sunday of the U.N. Security Council.

But diplomacy has so far failed to quell the worst escalation in fighting between Israel and Palestinians since 2014.

The White House said Biden updated Netanyahu on “high-level” contacts with regional partners to restore calm, and raised concerns about the safety of journalists.

Biden also spoke with Abbas, for the first time since the U.S. leader took office in January.

But diplomatic efforts are complicated by the fact the United States and most western powers do not talk to Hamas, which they regard as a terrorist organization. And Abbas, whose power base is in the occupied West Bank, exerts little influence over Hamas in Gaza.

In Israel, the conflict has been accompanied by violence among the country’s mixed communities of Jews and Arabs. Synagogues have been attacked, Arab-owned shops vandalized and street fights have broken out. Israel’s president has warned of civil war.

There has also been an upsurge in deadly clashes in the occupied West Bank.

An Israeli soldier shot at a Palestinian motorist who tried to run over soldiers at a military checkpoint late on Saturday, the military said. Palestinian health officials said the motorist had been killed. On Friday, 11 Palestinians were killed by Israeli troops, Palestinian medics said.