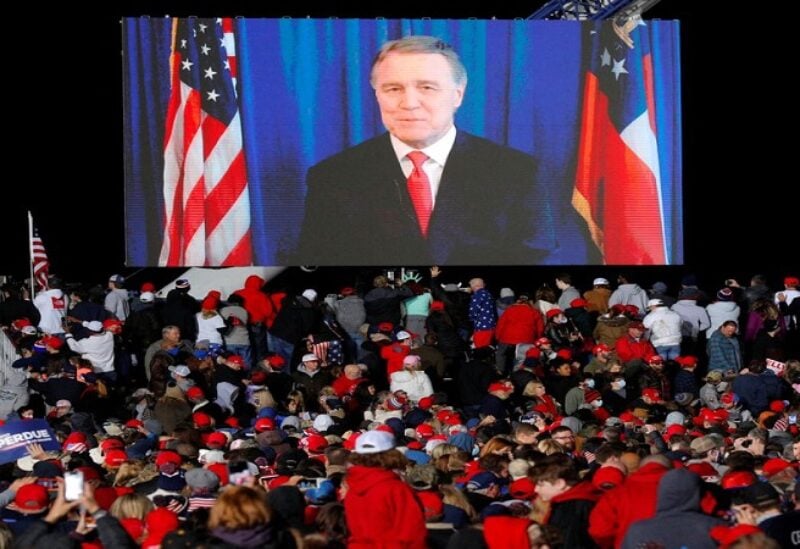 Since announcing his candidacy for the Georgia governorship earlier this month, Republican David Perdue has wasted no time in releasing ads that revive former President Donald Trump’s false voter fraud claims and filing a lawsuit seeking to inspect absentee ballots from the 2020 presidential election.

The former U.S. senator’s focus on what Republicans assert is election integrity will provide an early litmus test in the 2022 midterm contests for how such messaging resonates with voters in the post-Trump era. Republicans across the country have enacted new curbs on voting access and sought to expand control over election administration in the wake of Trump’s disproven stolen-election claims.

But Republicans in Georgia are split over whether Perdue’s rhetoric and attacks on the state’s sitting Republican governor, Brian Kemp, will hurt the party’s chances in what is expected to be a fierce general election fight against Democrat Stacey Abrams, a nationally-known voting rights activist.

“Perdue is signaling his loyalty to the Trump tribe,” said Carl Cavalli, a political science professor at the University of North Georgia.

“If Kemp wins by a large margin, it may mean the whole voter fraud drama does not have the legs that it was thought to have,” Cavalli said. “On the other hand, if Perdue wins or it’s a close battle, success breeds imitators.”

After saying he would challenge Kemp in the party’s May primary, Perdue took aim at the incumbent’s certification of the 2020 results that showed President Joe Biden defeated Trump in Georgia.

Kemp’s decision angered Trump, who publicly encouraged Republicans to run against him and quickly endorsed Perdue’s candidacy. Perdue said he would not have certified the results.

“I have never called to overturn an election, but certainly we should have gotten to the bottom of the issues of alleged fraud and irregularities,” he said in a Facebook post.

The antagonistic, Trump-fueled battle in Georgia stands in contrast to last month’s gubernatorial election in Virginia, where analysts say Republican Glenn Youngkin triumphed in part by distancing himself from the former president.

Embracing Trump’s false voter fraud claims likely will play well with the Republican base, according to Reuters/Ipsos polls that showed around 55% of Republicans nationally think the 2020 election was stolen.

The once reliably Republican state of Georgia has seen its political winds shift, however, as more Black, Asian and Latino voters move to the booming Atlanta area. Biden was the first Democrat to win Georgia in a presidential election since 1992, and voters in January ousted Perdue and Kelly Loeffler from the U.S. Senate in favor of two Democrats.

A few Republicans have warned that Trump’s fixation on his 2020 defeat risks splitting the party ahead of the November midterms, which look favorable to them amid Biden’s falling approval levels.

“This fascination with trying to win the first half rather than the whole game will come back to haunt us,” said Lieutenant Governor Geoff Duncan, a Kemp supporter who is urging Republicans to get over the “short-term sugar high” of Trump.

“We’re going to send a Republican nominee out with zero dollars the day after the primary, and we’re going to say: ‘Go get Stacey!'”

Other Republicans counter that politicians who have crossed Trump don’t stand a chance with a base that still adores him.

“I don’t think Governor Kemp can win,” said Randy Evans, a Georgia Republican and Trump’s former ambassador to Luxembourg. “Kemp is trying to hold the old party together. The problem is that the old party will not be enough.”

The primary in Georgia also will measure Trump’s sway over the Republican Party ahead of his own potential run in the 2024 presidential election.

Trump has already endorsed dozens of candidates for the midterm elections, including six challengers to incumbent Republicans in Congress who supported impeaching him after the deadly Jan. 6 assault on the U.S. Capitol by his supporters.

Public opinion polling conducted by the Kemp and Perdue campaigns and local media indicate Trump’s endorsement has given Perdue a significant initial lift, with the two men neck-and-neck.

Both have spent the early weeks of the campaign re-litigating past election decisions.

Perdue accused the governor of handing Democrats “control of our elections,” an apparent reference to a 2020 settlement between state election officials and Democratic groups that agreed how Georgia should process absentee ballots.

“If Brian Kemp had not caved to Stacey Abrams before the election in 2020, we wouldn’t be in this mess,” a Perdue campaign spokesperson said in a statement to Reuters.

Kemp’s team countered that he has worked to secure elections, signing sweeping voting restrictions into law. In a statement to Reuters, they said Perdue was “so concerned about election fraud that he waited a year to file a lawsuit that conveniently coincided with his disastrous campaign launch.”

As the two candidates tear into each other, many prominent Republicans in the state have so far stayed on the sidelines or sought to keep the focus on Abrams, who narrowly lost to Kemp in 2018. Loeffler, for instance, said via a spokesperson for her Greater Georgia group that she is focused on “preparing the ground game and voter mobilization.”

Some Republicans fear that Abrams, often discussed as a possible future presidential candidate, will be the ultimate winner of any Republican feud in the state at a time when the party should be gearing up for victory in the midterms.

“Abrams could ride this all the way to the White House if she wins in a Republican year,” said Martha Zoller, a Republican radio host in Georgia.