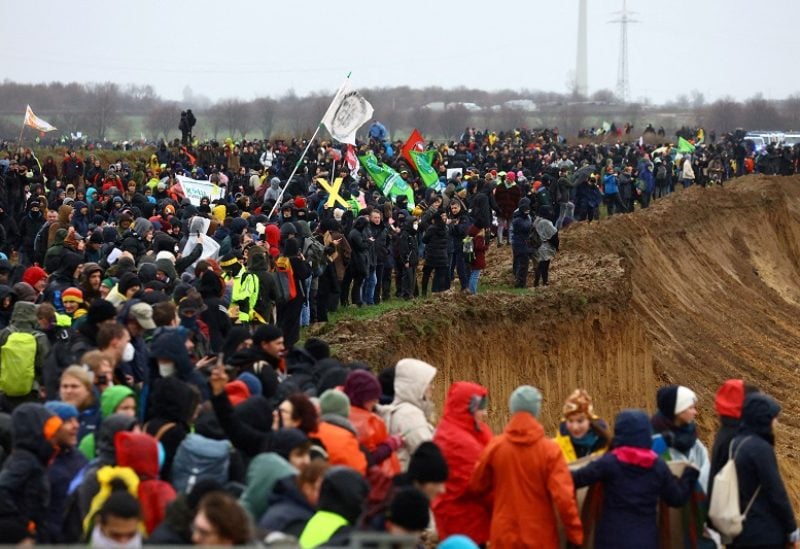 Activists demonstrate during a protest against the expansion of Germany's utility RWE's Garzweiler open-cast lignite mine to Luetzerath, Germany, January 14, 2023. REUTERS/Christian Mang TPX IMAGES OF THE DAY

Anti-coal activists clashed with the German police on Saturday, at a protest camp in the abandoned western village of Lutzerath, as demonstrators tried to prevent it from being mined for coal, according to private broadcaster n-tv.

There were no immediate reports of arrests or injuries, as the situation did calm down later in the evening, according to police.

Anti-coal activists expressed dismay at the crackdown in Lutzerath.

“What we are experiencing today and the last few days is pure police violence. We are shocked at how the police are proceeding and condemn this behavior. We remain steadfast because we know what we are fighting for: climate justice!” tweeted one activist of the anti-coal group Lutzerath bleibt.

More than 10,000 people took part in the anti-coal protest as police were completing the eviction of the remaining protesters who retreated to underground tunnels.

Earlier in the day, Swedish climate activist Greta Thunberg took part in a rally against the demolition of the village.

“The situation in Lutzerath is a huge international embarrassment for the federal (German) government,” Thunberg told the German Press Agency in Cologne.

“People have been defending Lutzerath for years as part of a global justice movement. The fact that people are taking action is a sign of hope,” she added.

Thunberg had sharply criticized the actions of the police clearing the village.

“It’s outrageous how the police violence is,” said the 20-year-old climate activist.

Since Wednesday, the police have been busy clearing and demolishing the area previously occupied by climate activists. Energy company RWE then wants to excavate the coal underneath. According to the government, this is necessary to ensure energy security.