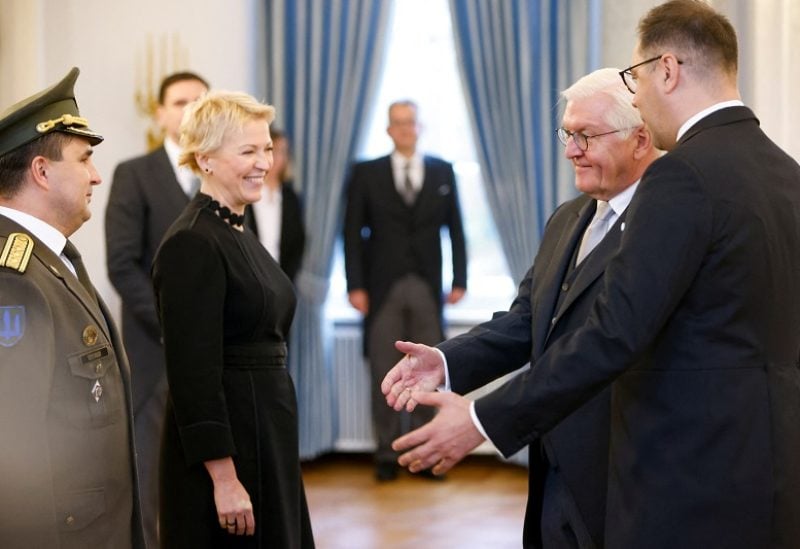 Oleksii Makeiev gestures next to his wife Olena Makeieva and German President Frank-Walter Steinmeier, on the day he receives his accreditation as Ukraine's Ambassador to Germany, at Bellevue Castle, in Berlin, Germany October 24, 2022. REUTERS/Michele Tantussi

In his first visit to Ukraine since the Russian invasion on February 24, German President Frank-Walter Steinmeier arrived in Kyiv on Tuesday.
“My message to the Ukrainians is that we are not only standing by your side. We will continue to support Ukraine, economically, politically and also militarily,” the president said after his arrival.

His message to Germans at home, Steinmeier said, was: “Let’s not forget what this war means for the people here in Ukraine. How much suffering, how much destruction there is. The people in Ukraine need us.”

“It was important to me, especially now in this phase of air attacks with drones, cruise missiles and rockets, to send a message of solidarity to the Ukrainians,” he added.

The German president had been expected in Ukraine last Thursday. However, the trip was canceled at short notice due to the tense security situation, as Kyiv was bombed by Russian missiles and drones.

An official from his office said that security authorities in Germany and the foreign ministry had advised Steinmeier not to go but that the visit would be rescheduled soon.

However, other leaders continued to visit Kyiv. For example, Swiss President Ignazio Cassis visited the Ukrainian capital on the same day that Steinmeier was due to be there.

Steinmeier was already planning a trip to Kyiv in April — together with the Presidents of Poland, Lithuania, Estonia and Latvia. However, the Ukrainian government disinvited Steinmeier, citing his Russian-friendly stance in recent years as the reason.

The Ukrainian position angered German politicians. Steinmeier himself had previously admitted to making mistakes over policy towards Russia.

It wasn’t until the beginning of May that Steinmeier and his Ukrainian counterpart Volodymyr Zelenskyy finally managed to clear the diplomatic air with a telephone call. The Ukrainian president personally invited Steinmeier to visit Ukraine.

Several German politicians have since traveled to the war-torn country, including Chancellor Olaf Scholz.