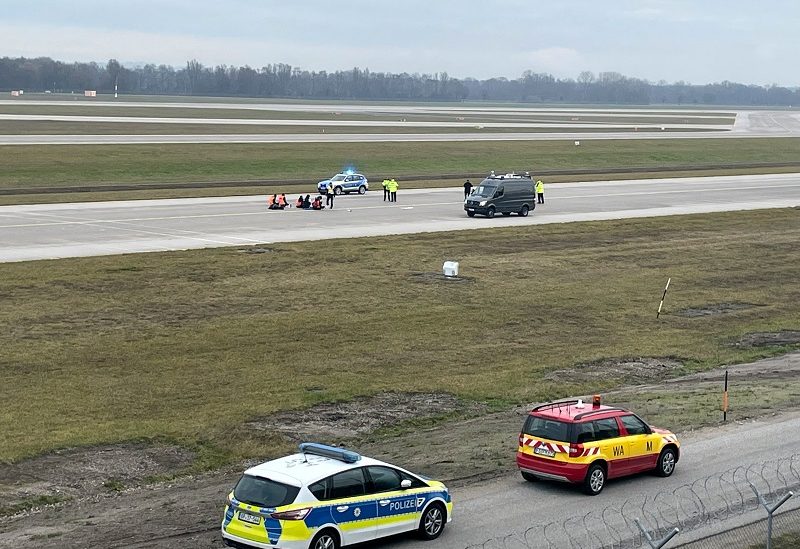 Activists of "Letzte Generation" (Last Generation) glued themselves to the tarmac of the airport to protest for a speed limit on highways as well as for affordable public transport, in Munich, Germany, December 8, 2022. REUTERS/Anja Guder

A group of climate activists of the “Letzte Generation” (Last Generation) temporarily blocked the runway at Munich airport in Germany, and also managed to storm a runway at Berlin-Brandenburg, said the German Airport authorities on Thursday.
Four of the activists glued their hands to the tarmac to protest against cheap air travel in Munich, they spent four activists spent around 45 minutes there. The spokesman said, “A spokesman for the airport said that four activists spent around 45 minutes glued to the airport’s northern runway before they were dislodged and arrested.”
The official also noted that the activists have since been taken into custody. As confirmed by the authorities, operations at the northern runway of Munich International Airport were resumed. Notably, there had been no cancellations or delays and flight operations have returned to normal.
Local police tweeted, “Again, several activists have forced their way into the air security zone of the northern runway of Munich International Airport. They glued themselves to a taxiway.”
On the other hand, “several people” stormed at the Berlin-Brandenburg airport, making their way onto a runway but there was no impact on flight operations.
The Last Generation environmental protest group said in a statement that it had carried out the protests in opposition to “a major state-subsidised contributor to the climate catastrophe”.
Spokeswoman Aimee van Baalen said: “We can no longer stand by silently as a few rich people drive the world into the abyss on behalf of all of us and devastate our common livelihood.”
Last Generation has carried out a series of protests in the past few months to highlight climate-related issues in Germany. Some of their increasingly eye-catching stunts drew criticism from politicians