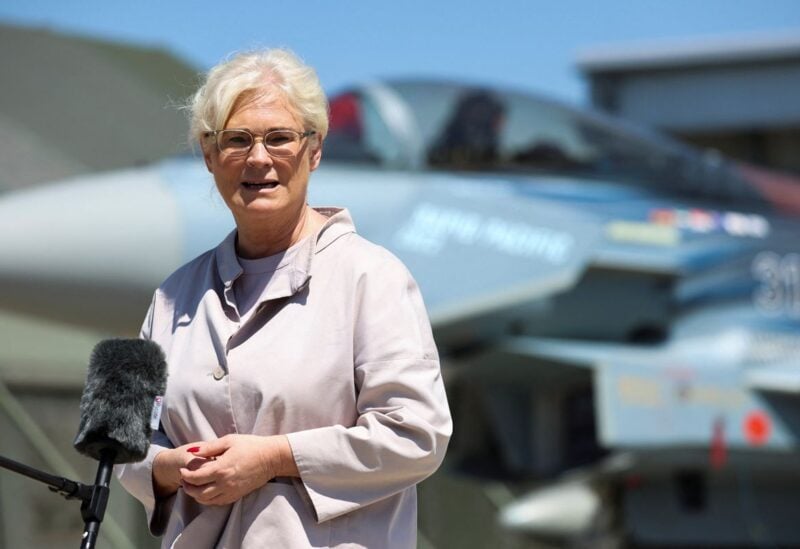 German Defence Minister Christine Lambrecht speaks during a visit at the air base of the 74th Tactical Air Force Wing in Neuburg an der Donau, Germany, July 22, 2022. REUTERS/Lukas Barth

The German military is closely monitoring the operations of Russian forces that have just arrived near its main camp in the Gao area of Mali, as well as the operation of the airport there, according to Germany’s defense minister.

Berlin has sent 1,000 troops to Mali, mostly around the northern town of Gao, where their main duty is to gather intelligence for the United Nations peacekeeping mission MINUSMA, which was established in 2013 to support foreign and local troops fighting Islamist terrorists.

The future of the German mission is in doubt, however, after the latest dispute with the ruling military junta in Bamako and the arrival of Russian forces in Gao, which added to Berlin’s unease over an increasing Russian military presence in Mali.

“What are the tasks of the Russian troops that have shown up directly next to our camp? Are they only supporting Malian soldiers with equipment and training? Or do the Russians influence the operation of Gao airport?” German Defence Minister Christine Lambrecht said in an interview.

“That would of course be a difficult situation for us, which would then have to be completely reassessed.”

So far, the Russian presence has had no concrete impact on the German military operation, according to Lambrecht.

In April, Germany called on the junta to cease working with Russian military contractors if it wanted to fully reactivate the European Union’s training of the country’s armed forces.

The Russian private military firm Wagner Group began supplying hundreds of fighters last year to support the Malian military and has since been accused by human rights groups and local residents of participating in massacres of civilians – accusations it has not responded to.

The German military suspended its reconnaissance mission for more than three weeks from mid-August after a spat with Mali’s junta over flight clearances, and only resumed operations earlier this month.

Lambrecht said the United Nations had struck deals with the Malian government with regard to the flight clearances and regular exchanges of troops at the camps, and that the procedures were currently working.

“Of course, we are observing very closely what exactly we can do to advance the democratisation and stabilisation of Mali,” Lambrecht said.

“We see that, temporarily, there are no clearances for drone flights. But we need these flights because without the surveillance of the drones and the resulting protection, our forces cannot go out of the camp as far (as they normally would go on patrol).”

Lambrecht also signalled that Germany would keep up its military engagement in Niger, which shares a border with Mali and where German troops have been part of a training mission that is supposed to wind up at the end of this year.