Germany to legalize cannabis use for recreational purposes 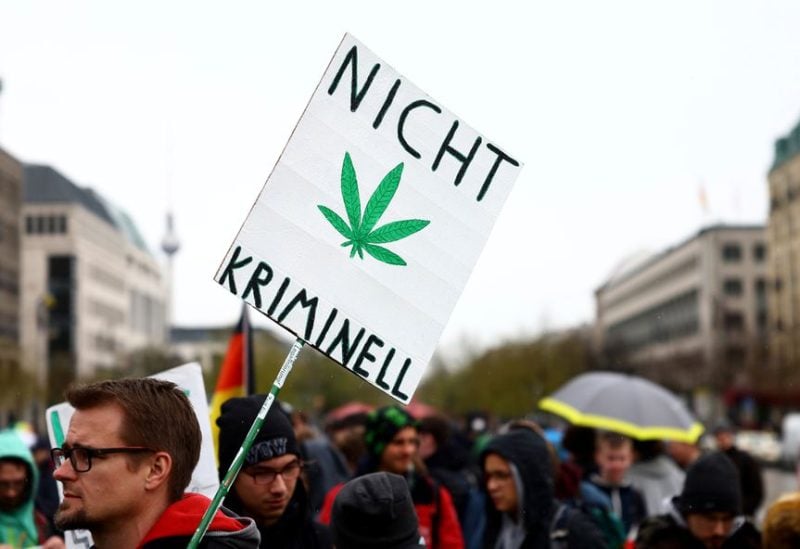 [3/4] A man carries a sign reading "Not criminal" as he participates in a gathering with marijuana activists to mark the annual world cannabis day and to protest for legalization of marijuana, in front of the Brandenburg Gate, in Berlin, Germany, April 20, 2022. REUTERS/Lisi Niesner/File Photo

The government of Chancellor Olaf Scholz announced plans to legalize marijuana, making Germany one of the first nations in Europe to do so.

A foundational document on proposed legislation to oversee the restricted distribution and consumption of cannabis for recreational purposes among adults was submitted by Health Minister Karl Lauterbach.

Acquiring and possessing up to 20 to 30 grams of recreational cannabis for personal consumption would also be made legal.

The coalition government struck an agreement last year to introduce legislation during its four-year term to allow the controlled distribution of cannabis in licensed shops.

Lauterbach did not give a timeline for the plan, which would make Germany the second European Union country to legalise cannabis after Malta.

According to the paper, private self-cultivation would be permitted to a limited extent. Ongoing investigations and criminal proceedings connected to cases no longer illegal would be terminated.

The government also plans to introduce a special consumption tax, as well as developing cannabis-related education and prevention work.

Some 4 million people consumed cannabis in Germany last year, 25% of whom were between ages 18 and 24, Lauterbach said, adding that the legalisation would squeeze out the cannabis black market.

Germany will present the paper to the European Commission for pre-assessment and will only draft a law once the Commission gives it a green light, the minister added.

The decision has already stirred a mix of reactions across Europe’s biggest economy.

Germany’s pharmacists association warned of the health risks of legalising cannabis and said it would put pharmacies in medical conflict.

The legalisation plan has not been welcomed by all federal states. Bavaria’s health minister, for instance, warned that Germany should not become a drug tourism destination in Europe.

“Consumption entails significant and sometimes irreversible health and social risks – and any form of trivialization is completely irresponsible,” Bavarian Health Minister Klaus Holetschek was quoted as saying by the Augsburger Allgemeine newspaper.

But Germany’s Greens said decades of prohibiting cannabis have only exacerbated the risks, adding that legal trade will better protect youth and health. “Because too restrictive conditions for the legal market only promote the black market for particularly strong cannabis,” lawmaker Kirsten Kappert-Gonther said on Wednesday.

“When the time comes, we will be able to offer franchise-like models for cannabis stores in addition to our own stores,” Mueller said.