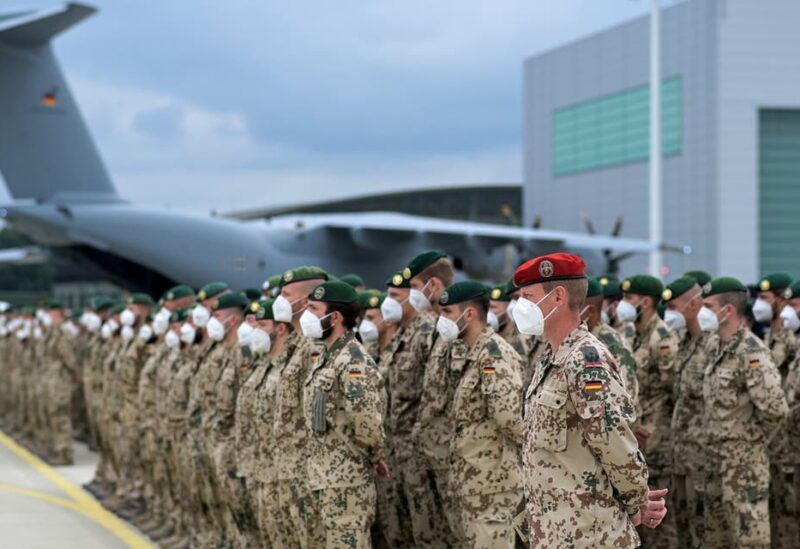 German soldiers line up for the final roll call in front of an German armed forces Bundeswehr Airbus A400M cargo plane after returning from Afghanistan at the airfield in Wunstorf, Germany, June 30, 2021. (File photo: Reuters)

Germany will step up efforts to fly to safety local staff who worked for its military in Afghanistan, Finance Minister Olaf Scholz was quoted as saying, as Taliban fighters seize more territory from forces loyal to the government in Kabul.

Since 2013, Germany has admitted nearly 800 Afghans in that category and about 2,500 family members over security fears, and calls to accelerate the process for support staff still there have grown louder as the Taliban have advanced.

“We are discussing whether there are possibilities to speed up the transport in order to fly those concerned out more quickly,” Scholz, the center-left SPD party’s candidate for chancellor in next month’s federal election, said in an interview with the Neue Osnabruecker Zeitung published on Tuesday.

“We are responsible for the locals who supported us on the ground.”

Violence has escalated there since April, when the United States announced plans to pull out troops by Sept. 11, and other members of transatlantic alliance NATO followed suit.

On Tuesday Taliban fighters, having overrun six provincial capitals in recent days, closed in on government buildings in the northern city of Aibak.

Germany had the second largest military contingent in Afghanistan after the United States.

Scholz, who said Berlin was coordinating with the Afghan government on the support staff issue, rejected calls for German solders to return to Afghanistan, echoing comments from Defense Minister Annegret Kramp-Karrenbauer on Monday.

“I do not consider a further military engagement in Afghanistan to be appropriate,” Scholz said. “After 20 years, the international community has just withdrawn. Nationally and internationally, there are no efforts whatsoever for a second deployment.”