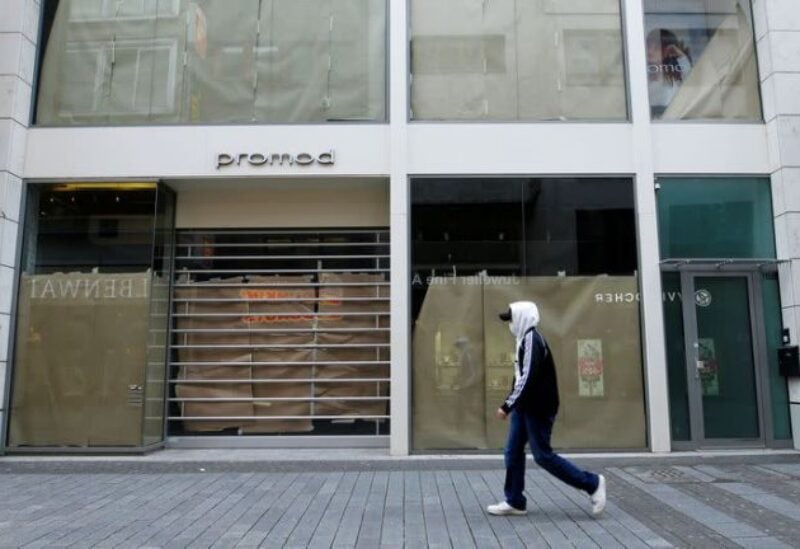 FILE PHOTO: A man walks along a closed shop at the main shopping street Hohe Strasse amid the coronavirus disease (COVID-19) pandemic in Cologne, Germany, March 18, 2021.

Germany is extending its lockdown until April 18 and urging citizens to stay at home for 5 days over the Easter holidays to try to break a third wave of the COVID-19 pandemic, Chancellor Angela Merkel said early on Tuesday.

In talks that ran deep into the night, Merkel pushed the leaders of Germany’s 16 states to take a more stringent stance to fight the coronavirus, reversing plans for a gradual re-opening of the economy agreed earlier this month after a sharp rise in the infection rate.

“We are now basically in a new pandemic. The British mutation has become dominant,” Merkel told a news conference.

“Fundamentally, we face a new virus of the same kind but with very different characteristics. More deadly, more infectious, and infectious for longer.”

Germany started cautiously easing restrictions earlier this month. However, the spread of more infectious variants of the virus has pushed up cases, prompting concerns that hospitals could soon be overwhelmed without further curbs.

The number of cases per 100,000 people over a week stood at 107 on Monday, above the level at which intensive care units will be overstretched. More than 3,000 people with COVID-19 are in intensive care.

On Monday, Britain demanded the European Union allow the delivery of coronavirus vaccines it has ordered as tensions over a potential export ban on EU-manufactured shots mounted and Brussels pointed an accusing finger at drugmaker AstraZeneca.

After falling far behind post-Brexit Britain and the U.S. in rolling out vaccines, EU leaders are set to tackle a potential ban on vaccine exports to Britain at a summit on Thursday.

“We have a problem – that was known – with AstraZeneca,” Merkel said, noting that she supported the European Commission. “We will decide responsibly.”

For 5 days from April 1, Germans are to stay at home and reduce contacts as much as possible. But the late-night agreement did not include a closing of all stores, including essential shops like supermarkets, which Merkel had called for.

Big family gatherings will be banned over the holidays, with no more than 2 households, or up to 5 people, being allowed to meet. The government will ask churches to hold any Easter services online to avoid gatherings.

Economists said the extension of Germany’s lockdown measures would delay a much hoped-for recovery in Europe’s largest economy from spring until early summer.