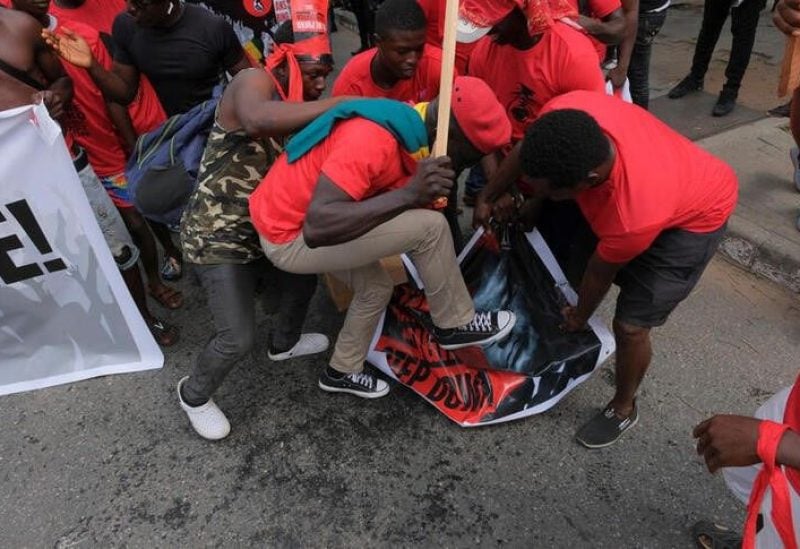 Protestors vandalise a portrait of Ghanaian President, Nana Akufo-Addo, during a demonstration against the worsening economic crisis, in Accra, Ghana November 5, 2022. REUTERS/Francis Kokoroko

More than 1,000 protesters marched through Ghana’s capital Accra on Saturday, calling for the resignation of President Nana Akufo-Addo amid an economic crisis that has hammered the cedi currency and seen fuel and food costs spiral to record levels.

Filing past police in riot gear, the red-clad crowd waved placards and chanted ‘Akufo-Addo must go’ and ‘IMF no’ in reference to the government’s ongoing talks with the International Monetary Fund for billions of dollars to prop up the economy.

The president last week sought to reassure Ghanaians that the authorities would get the country’s finances back on track after consumer inflation topped 37% in September, a 21-year peak despite aggressive policy tightening.

“He has failed and we are asking him to resign. High fuel price increments are killing the people of Ghana,” said protester Rafael Williams.

The peaceful protest was the latest in a series of demonstrations this year over the soaring cost of living that has made it even harder for people to get by in a country where around a quarter of the population live on less than $2.15 per day, according to the World Bank.

Ghana, which produces gold, cocoa and oil, has also seen the its cedi currency plummet by more than 40% against the dollar this year, making it one of the worst-performing currencies in a region that is suffering from the fallout from a global economic slowdown.

“We are speaking to the IMF. They should not give them loans,” said tailor Francisca Wintima, who was among those protesting in the capital.

“Enough is enough. We have gold, we have oil, we have manganese, we have diamonds. We have everything we need in this country. The only thing that we need is leadership.”