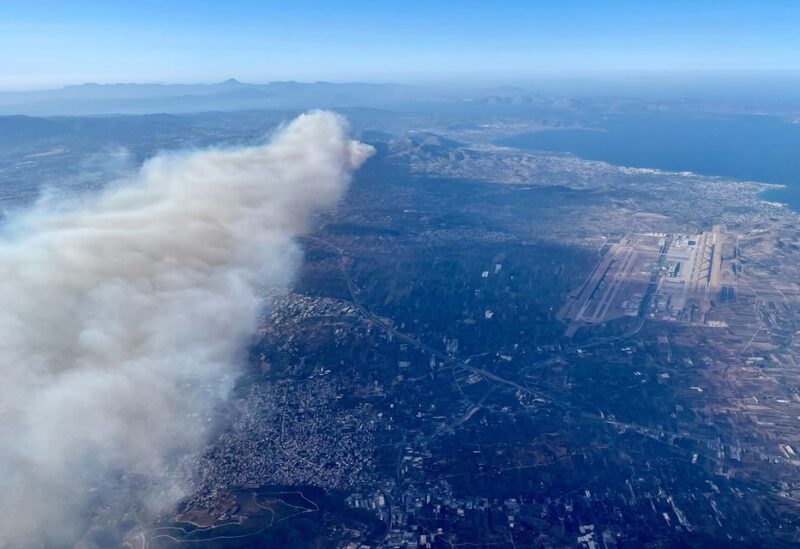 Smoke rises as a wildfire burns on Mount Penteli, next to the Eleftherios Venizelos International Airport, in Athens, Greece, July 19, 2022. REUTERS/Alkis Konstantinidis

On the outskirts of the Greek capital, a wildfire raged on a mountainous area close to homes on Tuesday, forcing authorities to order the evacuation of at least two locations. The fire was fueled by high winds.

About 27 kilometres (16 miles) outside of the center of Athens, in the Penteli neighborhood, thick clouds of dark smoke could be seen rising into the sky.

About 78 firefighters assisted by 22 engines and 16 aircraft were trying to tame the blaze which was burning on two fronts.

Authorities have ordered the evacuation of the Drafi and Anthousa areas. They have also advised residents in nearby areas to be ready to evacuate their homes, if ordered to do so. Traffic was halted on roads leading to Penteli.

“It is a difficult fire and we will do our best to contain it,” Fire Department spokesperson Yiannis Artopios told state TV ERT, adding that 28 firefighters from Romania were also assisting the Greek firefighters’ efforts. We are figthing it, we are trying to circle the fire.”

Last year, wildfires ravaged about 300,000 acres (121,000 hectares) of forest and bushland in different parts of Greece as the country experienced its worst heatwave in 30 years.