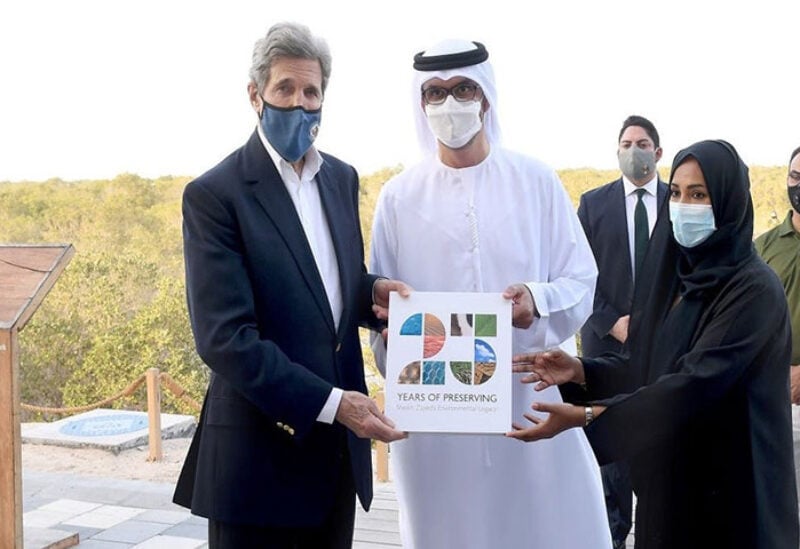 US Envoy John Kerry meets with Arabs in UAE

Countries from the Gulf and the Middle East gathered in the United Arab Emirates and released a statement Monday committing to “accelerate climate action.”

“We will work together to ensure the success of the Paris Agreement and will cooperate with our global partners to strengthen climate ambition. We urge the international community to take steps to keep a Paris-aligned temperature limit within reach, including through enhanced nationally determined contributions,” a joint statement from the UAE Regional Climate Dialogue read.

The initial meeting was held on Sunday after US President Joe Biden’s special envoy for Climate, John Kerry, met with leaders from the UAE, Kuwait, Egypt, Bahrain, Qatar, Iraq, Jordan, Sudan and Oman.

Biden has said climate change would be a central focus on US foreign policy. The US president plans to host a global summit later this month to discuss the issue and ways to reduce nations’ carbon footprints.

The gathered countries also committed to reducing emissions by 2030 and increasing investment in a new energy economy.

They also pledged to help “the world’s most vulnerable cope with the devastating consequences of climate change.”

The Crown Prince also announced a project to plant 10 billion trees within Saudi Arabia in the years to come, which would increase the areas covered by the current trees by 12 times.

Separately, the US and UAE released a joint statement on the climate challenge. “We believe decisive action can be an engine for economic growth and sustainable development,” the statement read at the end of Kerry’s visit to the UAE.

The two countries said they would work together to make new investments financing decarbonization across both the Middle East and North Africa (MENA) region.

“We are encouraged by the conversations we held in Abu Dhabi with other countries in the region, which we believe inaugurated a new era of cooperation in the region for a future focused on prosperity through climate policy, investment, innovation, and sustainable economic growth.”