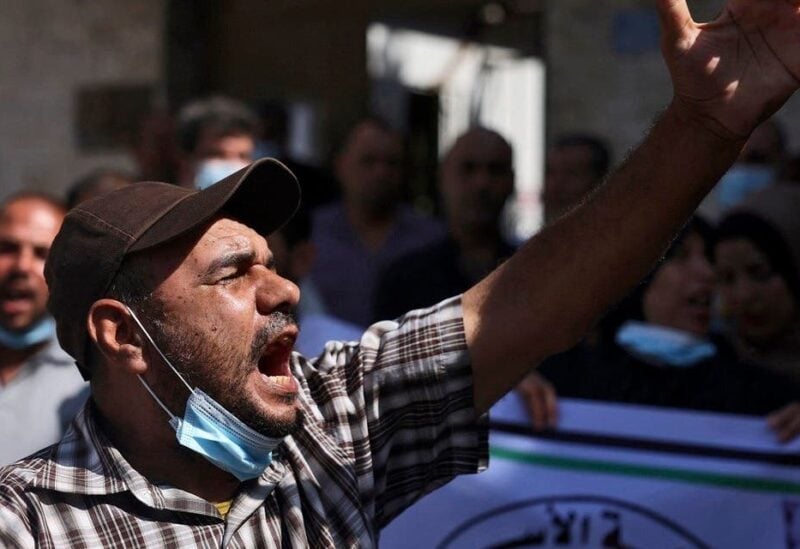 Palestinians chant slogans during a rally next to the Red Cross building in Gaza City in support of more than a thousand prisoners who are in Israeli jails, on September 9, 2021. (Mohammed Abed/AFP)

Israel is responsible for the suffering of Palestinian prisoners inside Israeli jails, a Hamas statement announced yesterday.
“Hamas holds the Zionist occupation fully responsibility for the repercussions of the dangerous suffering of the Palestinian detainees on hunger strike protesting their administrative detention,” the statement read.
“We condemn all attempts and practices by Israeli Prison Services aimed to discourage the prisoners from continuing their strike,” the statement added, pointing out that the Palestinian hunger strikers “are seeking their freedom.”
Meanwhile, Hamas said that the issue of the prisoners necessitates that all Palestinians have to assume their responsibilities and mobilise all their efforts in support of prisoners, utilising all forms of struggles to force the occupation to end their suffering.
“We call on all human rights, international and humanitarian bodies to break their silence and take immediate and effective actions to end the suffering of the detainees, especially the hunger strikers, and end all the occupations’ crimes and violations against them.”
Six Palestinian prisoners have been on hunger strike seeking an end to their administrative detention – imprisonment without charge or trial.
Kayed Al-Fasfous, who launched his strike first, has now abstained from everything except water for 117 days.
Rights groups say that there are over 4,600 Palestinian prisoners inside Israeli jails, including about 500 held under administrative detention.