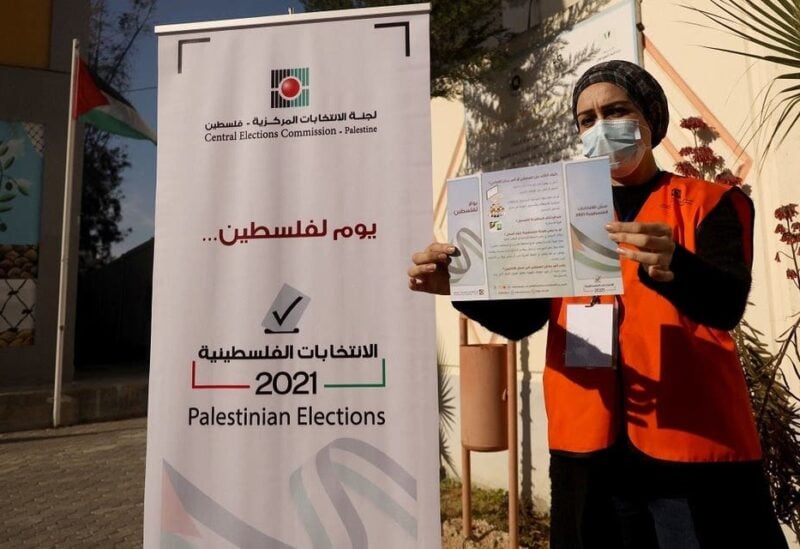 A Palestinian member of Central Elections Commission displays an information leaflet following the opening of the first Voter Information and Registration Centre in Gaza City on February 10, 2021. (Mohammed Abed/AFP)

Hamas, the Islamist group that runs Gaza, said Wednesday it would not participate in municipal Palestinians elections set by the Palestinian Authority for December unless a general election is also called.

Hamas is a long-standing rival of the PA, based in the occupied West Bank, and had supported the decision to hold Palestinian legislative and presidential elections in May and July.

But president Mahmud Abbas in April indefinitely postponed those votes, which would have been the first Palestinian elections in 15 years.

But Palestinian experts said Abbas balked out of fear that Hamas would sweep the polls, in a repeat of 2006 results that the president’s Fatah movement did not accept.

Hamas, which was furious by Abbas’s general election postponement, said Wednesday that it “would not be part of… fragmented municipal elections.”

Those votes could happen “simultaneously or according to a nationally agreed timetable,” he said.

“If that is plan, we are ready to participate.”

The municipal elections called by the PA would take place in 387 localities throughout the West Bank and Gaza on December 11, and then in 90 other places at a later date that has yet to be set.

Hamas’s rejection of the process would make voting impossible in Gaza, an Israeli-blockaded territory controlled by the Islamists since 2007.

Hamas is considered a terrorist organization by the United States and European Union but is seeking to bolster its legitimacy through election wins and by joining the PLO, a group of Palestinians factions recognized by Israel and the international community.