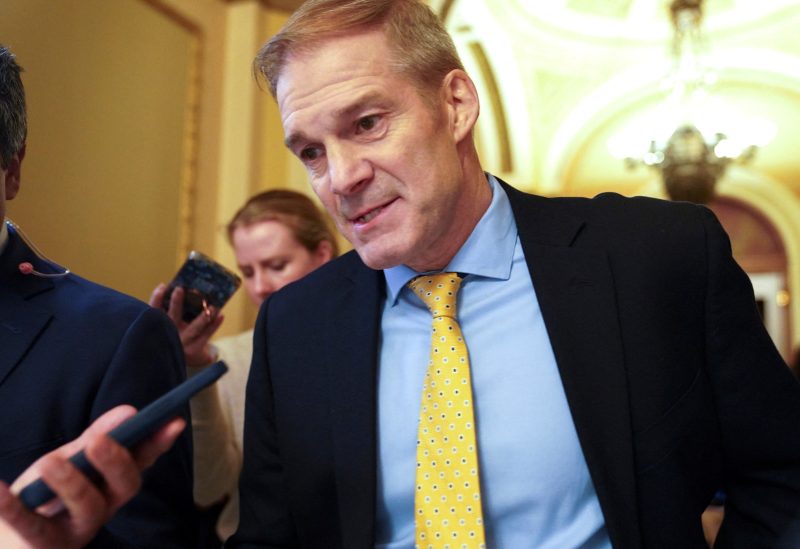 U.S. Rep. Jim Jordan (R-OH) speaks to reporters as he leaves the House Chamber after three rounds of votes failed to elect a new Speaker of the House on the first day of the 118th Congress at the U.S. Capitol in Washington, U.S., January 3, 2023. REUTERS/Nathan Howard

For much of the last 16 years Republican Jim Jordan’s combative, in-your-face style of politics made the former college wrestler a constant source of trouble for his party’s leadership in the U.S. House of Representatives.

Now his party is deciding whether the hardline co-founder of the House Freedom Caucus will lead the chamber in challenging Democratic President Joe Biden and the Democratic-controlled U.S. Senate for the next two years.

The 58-year-old congressman from Ohio emerged on Tuesday as a potential alternative to Kevin McCarthy for the House speakership, a powerful job that is second in line to the Oval Office after the vice president.

With McCarthy opposed by enough Republicans to deny him a House majority on vote after vote, a group of fellow hardliners nominated Jordan, who nonetheless backed McCarthy and gave an impassioned speech on his behalf.

Twenty Republicans voted for Jordan – fewer than a tenth of those backing McCarthy, but enough to stop his progress. The House recessed after three votes without giving McCarthy the House majority he needed on Tuesday and adjourned until noon ET (1700 GMT) on Wednesday to try again.

Being elected speaker would be a huge step up for Jordan, known for eschewing suit jackets at congressional hearings and news conferences, potentially making him the successor to, and a sharp break from, liberal predecessor Nancy Pelosi, a Democrat.

Now in his ninth term and 17th year in the House, Jordan would likely push hard for steep cuts to domestic programs including popular social services and be a voice against abortion and LGBTQ rights, while advocating greater parental roles in public school education.

While raising his profile on House committees over the years and especially during Republican Donald Trump’s presidency, Jordan also found himself fending off accusations that as a wrestling coach at Ohio State University in the 1980s and 1990s he was aware of sexual harassment plaguing the college team but did nothing to stop it.

A champion wrestler in high school and college before becoming a college coach, Jordan denied the accusations and thrived in Congress.

During Trump’s first impeachment in late 2019 and early 2020, it was Jordan who stood before the cameras reciting the mantra over and over: “There was no quid pro quo.”

He was referring to charges by Democrats, who then controlled the House, that Trump held back U.S. military aid to Ukraine while asking its president, Volodymyr Zelenskiy, in a phone call to launch an investigation into Joe Biden’s son Hunter. The call took place at a time when the elder Biden was emerging as Trump’s likely opponent in the 2020 presidential race.

In 2011, with a newly installed Republican majority in the House, Jordan made President Barack Obama’s life miserable by demanding deep budget cuts opposed by Democrats. He helped lead the government to the precipice of an historic default on government debt by insisting on the cuts.

Jordan ignored pleas, including from the U.S. business community, to relent and allow for more government borrowing. Global financial markets were rocked by the uncertainty.

With the House once again controlled by Republicans, and the party’s far-right wing ascendant, concerns about a possible government default later this year have re-emerged.

On immigration, Jordan was a key player in blocking what had been long negotiations toward comprehensive immigration reform.

A bipartisan bill passed in 2013 in the Senate would have vastly increased spending on border security. But it also would have granted a path to citizenship for immigrants living in the United States illegally for years and had committed no serious crimes.

With then-Speaker John Boehner maneuvering to bring a similar bill to a vote in the House, Jordan told Reuters at a key moment that it was dead. He turned out to be right in an embarrassment to Boehner.

In his speech nominating McCarthy on Tuesday for the speaker’s job, Jordan spelled out his own priorities.

“We have a border that is no longer a border. We have a military that can’t meet its recruitment goals. We have bad energy policy, bad education policy, record spending, record debt and a government that has been weaponized against ‘we the people’; against the very people that we represent,” he said.