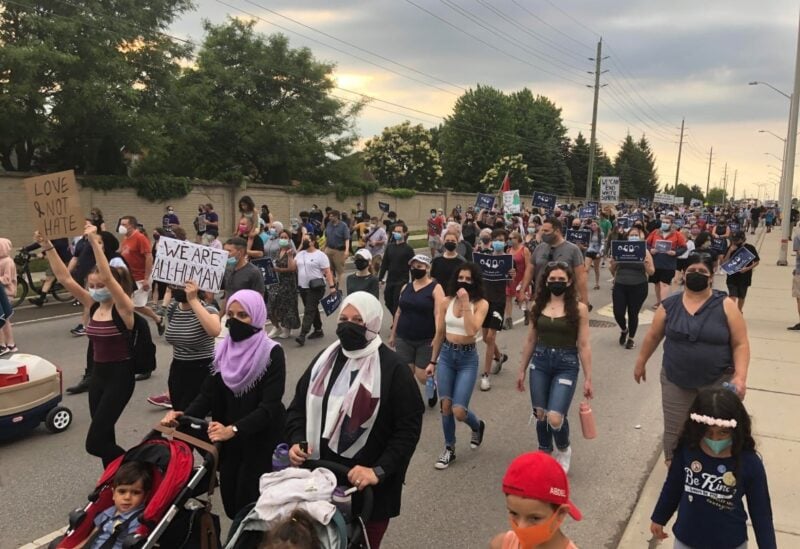 Thousands of people marched in London, Ont., Friday night in a multi-faith show of solidarity for the Afzaal family, four of whom were killed June 6 in a hit and run that police say was motivated by anti-Muslim hate. (Travis Dolyny/CBC News)

“There is no racism in Canada,” is a typical phrase that describes the country’s accepting and pleasant attitude. However, a string of hate crimes, mass killings, and hatred towards ethnicities is eroding the country’s picture-perfect reputation.

Canada’s official government website states that diversity and inclusion are cornerstones of Canadian identity, a source of social and economic strength. The image of Canadians in the world’s eye is primarily positive, warm, generous, polite, always saying please, thank you and sorry. The London-based Legatum Institute also listed the country as the most tolerant in the world in 2015.

However, a lurking darkness behind Canada’s gilded image is slowly seeping into public view as discriminatory, Islamophobic, anti-Semitic and racist acts are on the rise.

Last week, six Canadian youths were charged with multiple hate crimes after assaulting a young Syrian refugee. The assault, recorded on video and shared widely on social media, occurred on Sept. 8 near Gloucester High School in Ottawa. In the video, the 15-year-old Syrian orphan can be seen surrounded by other young boys, one ripping a necklace from his neck before he is pushed to the floor and punched and kicked.

The six face charges, including robbery, conspiracy to commit an indictable offense, and intimidation.

Outwardly, Canada does have a welcoming policy of accepting refugees. Around one-fifth of the country’s population is foreign-born, and Canada has taken in more than one million refugees since 1980, according to UNCHR.

However, not all Canadians are so welcoming of refugees, particularly when it comes to those from the Middle East. A May 2022 survey by the Angus Reid Institute found that only 35 percent of Canadians support accepting more refugees from Afghanistan, and only 31 percent support taking in Syrians.

The attack on the Syrian youth is far from an isolated incident, and the past decade has seen intolerance against Muslims on the rise in Canada. In September 2014, a group of Muslim students at Ontario’s Queen’s University was attacked by men yelling racial slurs. In May 2016, a student of Iranian origin at Western University in Ontario was assaulted by a perpetrator who called him an “Arab.”

In January 2017, an armed man attacked the Islamic Cultural Center in Quebec, leaving six dead and 19 wounded. Three years later, a volunteer at the International Muslim Organization was stabbed in Toronto.

Last year, an entire family — 77-year-old Talat Afzaal, her son, 46-year-old Salman, his wife, 44-year-old Madiha, 15-year-old Yumna, and nine-year-old Fayez — were struck by a pickup truck in London, Ontario. All but Fayez died, and police later said that the perpetrator had Islamophobic motives.

In March, worshippers at the Dar Al-Tawheed Islamic Center were shocked to find a man entering the mosque and spraying bear spray toward the 20 worshippers, but they were quick to subdue the hatchet-wielding attacker.

The government agency Statistics Canada conducted a study in August 2022, revealing that the number of documented Islamophobic attacks rose from 84 in 2020 to 144 in 2021.

Racist and xenophobic attacks in Canada may be justified in the minds of those with a propensity to commit hate crimes by Canadian government policies. Since 2010, local and national governments have attempted to implement laws banning the headscarf. In 2017, the National Assembly of Quebec passed a law prohibiting wearing face coverings while giving or receiving services from the state — essentially meaning that women who wear the niqab or burqa could no longer work in government offices or even use public transportation.

Surveys in 2017 by Ipsos and the Angus Reid Institute found that 76 percent of Quebecers and 70 percent of Canadians outside of Quebec supported the law or one similar to it.

Though Muslims are the most disliked group in Canada (by 28 percent of Canadians, according to a 2016 FORUM poll), they are not the only victims swept up in the tide of hate sweeping the country. The number of hate crimes overall increased from 2,646 in 2020 to 3,360 in 2021, according to Statistics Canada, and attacks targeting Jews rose by 47 percent in the same period.

Hateful rhetoric has even spread beyond religious minorities and the foreign-born. Though the US has often been singled out in terms of its horrific treatment of Native Americans — called First Nations people in Canada — Canada’s track record is not much better. Last year, a mass grave containing 215 indigenous children, some as young as three, was discovered at the site of the Kamloops Indian Residential School in British Columbia.

The “cultural genocide,” described by a National Truth and Reconciliation Commission, created as part of a government apology and settlement over the schools, marks a dark chapter in Canadian history.

Indigenous people of Canada suffered greatly in these schools, with many exposed to mental, physical and sexual abuse as schoolteachers attempted to assimilate them, forcing them to convert to Christianity and forbidding them from using their indigenous names and language or wearing traditional clothing. Many thousands also died from lack of adequate medical care.

Though decades have passed since the last residential schools were shut down, and the government of Canada’s website states that it supports “Indigenous peoples’ right to self-determination, including the right to freely pursue their economic, political, social, and cultural development,” First Nations people in Canada continue to be victimized.

In Canada, a settler colonial state, systemic racism is deeply rooted in the country’s policies, processes and system. This means tht the systems were designed to benefit white colonists while disadvantaging the indigenous populations who had lived there before colonialism.

According to Statistics Canada, more than one-third of those subjected to sexual or physical violence while under the government’s care were indigenous. According to a Human Rights Watch report from 2013, hundreds of indigenous women and girls have been murdered or gone missing across the country over the past decades. The report also documented at least ten incidents in which Canadian policy violated the rights of indigenous women and girls.

Canada’s image as a clean, tolerant, accepting nation is belied by the strong undercurrent of hate and intolerance, which has only risen in the country. To its credit, in 2017, the 42nd Canadian Parliament passed Motion 103, which stated that the members of the House of Commons called on Canada’s government to condemn Islamophobia and carry out studies on how to reduce racism and discrimination.

Though the bill passed, it sparked many protests, with anti-Muslim and far-right groups organizing against it. The MP who introduced the bill, Iqra Khalid, reportedly received tens of thousands of hateful emails after proposing the bill.

Last year, the Canadian government hosted a national summit on Islamophobia and announced its intention to declare Jan. 29 as a day of remembrance for the Quebec City mosque attack.

Though Canadian Muslims welcomed the pressing of charges against the perpetrators of the attack on the 15-year-old Syrian refugee, they say that there is still a lot to be done for Canada’s reality to align with its squeaky-clean image.

Speaking to CBC Canada in September last year, former National Council of Canadian Muslims CEO Mustafa Farooq said: “What Canadians should keep in mind is that these (policies) are unfortunately somewhat of a drop in the bucket scenario in terms of actually solving the problem.”