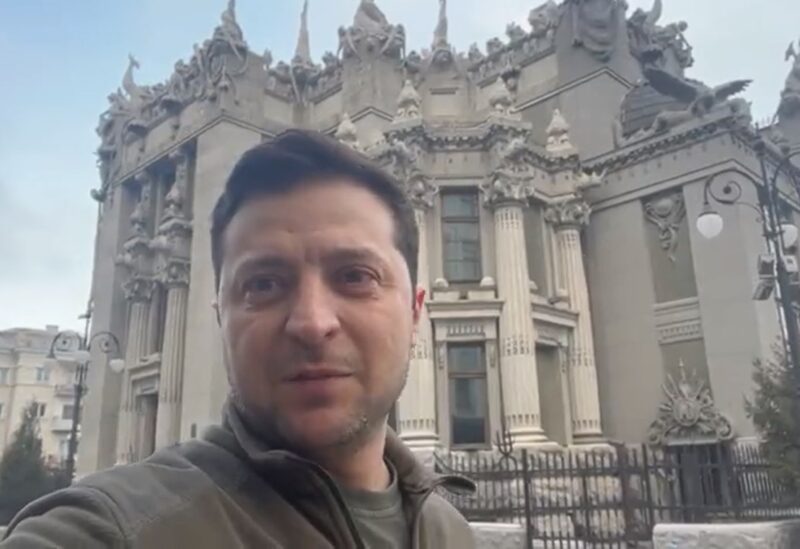 Russia is sending an unspecified number of troops from the country’s far east to Belarus for major war games, military officials said.

It comes after Zelensky had rebuked Belarusians for allowing their country to be used as a staging ground for the Russian invasion, adding that Ukrainian cities are facing an attack on a scale unseen since World War II when Belarus and Ukraine faced a Nazi invasion as parts of the Soviet Union.

“But you aren’t on the same side with us in the war that is going on now,” Zelensky said in Russian, which is widely spoken in Belarus.

“The Russian military is launching missiles at Ukraine from your territory. From your territory they are kiling our children, they are destroying our homes and trying to blow up everything that has been built for decades.”

The US again stressed its concern, with White House press secretary Jen Psaki describing the Russian forces’ move into Belarus as part of as “extremely dangerous situation.”

The Russian invasion has mostly focused on northern, southern and eastern areas of Ukraine, though missiles also hit the Yavoriv military base last week, close to the Polish border.

“A situation may arise when forces and means of the regional group of forces will be insufficient to ensure reliable security of the union state, and we must be ready to strengthen it,” Fomin said at a meeting with foreign military attaches.

“We have reached an understanding with Belarus that it’s necessary to engage the entire military potential for joint defence.”

Belarusian President Alexander Lukashenko, who has edged even closer to Russia amid crippling Western sanctions over his crackdown on domestic protests, has recently offered to host Russian nuclear weapons.

“Now the reason for what’s happening in the world is unipolarity, the monopolisation of our planet by the United States of America,” Lukashenko said in an interview with the Japanese television channel TBS.

The Belarusian leader denigrated the Ukrainian president as an American puppet and charging that the Russian attack resulted from Zelensky’s failure to accept Russian President Vladimir Putin’s demand for Ukraine to renounce its bid to join NATO.

He also bemoaned the break-up of the Soviet Union in 1991. The theme is one Putin has frequently discussed, not least when he suggested in speeches before the invasion that Ukraine was an artificial construct and an “inalienable part” of Russian history and culture.

“While the USSR existed, the world was multipolar and one pole balanced the other,” he said.