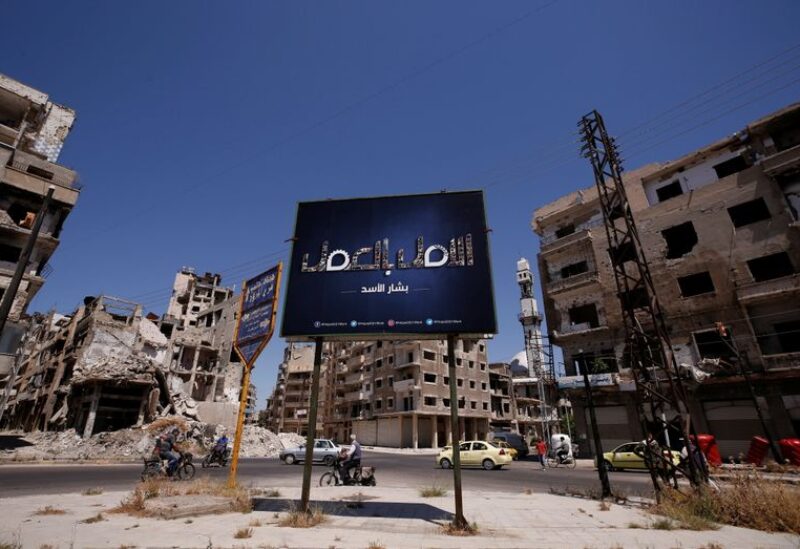 A billboard that reads "Hope through work. Bashar al-Assad" is seen near damaged buildings, ahead of the May 26 presidential election, in Homs, Syria May 23, 2021. REUTERS/Omar Sanadiki

At the entrance to Bab Tadmor, a neighborhood of Homs that was once a rebel stronghold, an election billboard showing a smiling Syrian President Bashar al-Assad hangs down the side of a bombed out building.

Homs, 160 kilometers (100 miles) north of Damascus, suffered severe damage during Syria’s ten years of war. The city center and several neighborhoods were almost entirely destroyed after years of air strikes and barrel bombs, and still lie in ruin and deserted.

“We say yes to Bashar”, the poster reads.

On May 26, Homs will be voting in presidential elections for the first time since the war.

Assad is all but certain to win, running against two obscure candidates in an election his opponents and the West view as a farce to rubber stamp his grip on power.

On the road to Al Wa’er, the last neighborhood to fall to government forces in May 2017, the government has put up posters encouraging voter participation.

“Your vote in the ballot box is a bullet in the chest of the aggressor,” says one poster hanging against a destroyed building.

In 2011, thousands of residents took to the streets of Homs in anti-Assad demonstrations in unprecedented acts of defiance, but security forces violently crushed the protests. Rebel groups took up arms, and fighting spread throughout the city as civilians cowered in the basements.

In her home in Al Waer, Om Ali, a 38-year old mother of six, recounts the suffering of those years.

“We lived in our house, we could not go in or out as there was fighting,” she said. “We survived on chickpeas and groats and water… it was a very bad situation for us.”

During that time, Om Ali, who says she will vote for Assad, fled Homs for a short period when conditions became too dire, going north to Jarablus, a town along Syria’s northern border with Turkey.

But while she was able to come back, many are not, for fear of reprisals. Thousands of opposition fighters and their families also fled several Homs districts as one after the other fell back under state control, in what the government dubbed reconciliation deals.

Those deals were criticized by the opposition and the United Nations as forced displacement of Assad’s opponents, often after months or years of siege and bombardment.

Mohamed Khalaf, a car mechanic who left al-Waer for five years from 2013-2018, is also now back home.

Having repaired his house and his shop, he too says he will vote for Assad in the hope that living conditions improve.

“May be things will go back to what they were and God will help us with this economy,” he said.

In the the staunchly pro-Assad district of Nazha, visitors are welcomed by a huge board displaying the images of men who died fighting for the army.

Mohamed Shamlas, a tailor from another pro-Assad neighborhood, Seteen Street, lost his son Ali in the war.

A large poster of Ali, who died in 2015 fighting for the army, alongside images of the Syrian flag and the late president Hafez al-Assad, adorns Shamlas’s living room, where he sits playing his oud and singing a song praising the current president.

Shamlas says he hopes there will be no more war.