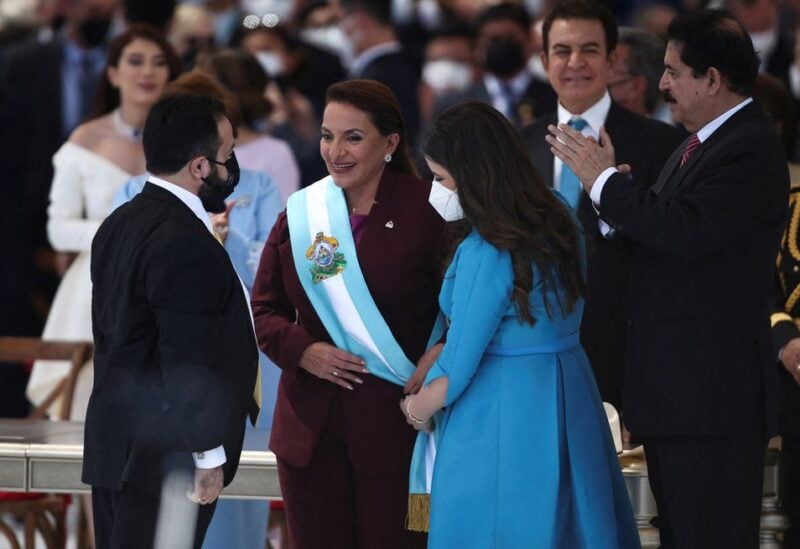 Honduran President Xiomara Castro receives the presidential sash from her granddaughter, Irene Melara, and the President of the Congress Luis Redondo, during a swearing-in ceremony in Tegucigalpa, Honduras January 27, 2022. REUTERS/Jose Cabezas

On Thursday, Honduran President Xiomara Castro proclaimed a national security emergency and started executing a new strategy to tackle the escalating number of extortion crimes being committed by violent criminal organizations operating throughout the nation.

Castro’s proposed regulations would permit the suspension of several constitutional rights in regions where criminal gang activity is prevalent, the deployment of 20,000 police officers, new security measures for the highways, and anti-money laundering measures.

Congress must still approve the suspension of constitutional rights, though the security plan came into force on Thursday.

The declaration also authorizes the Honduran government to make extraordinary use of public funds to combat criminal gangs known for involvement in illicit activities such as kidnapping and drug trafficking.

The leftist president announced the new plan to combat extortion afflicting the impoverished Central American nation in a television broadcast.

In exchange for a so-called “war tax”, gangs offer protection or say that those who pay up will not be killed. The gangs have torched buses and killed drivers who did not pay the fee, prompting businesses and people to pay out of fear.

This extortion generates annual profits equivalent to $737 million for the gangs, nearly 3% of the country’s gross domestic product, according to the Association for a More Just Society, a security-focused non-governmental organization.