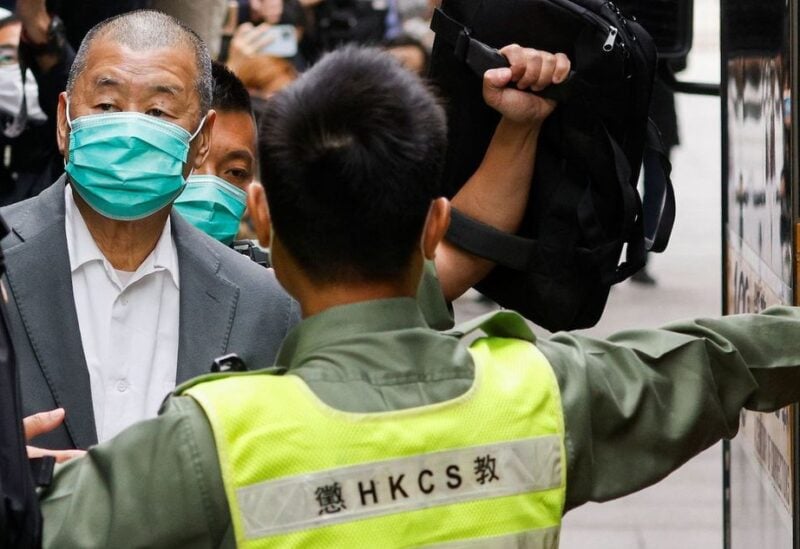 Hong Kong authorities on Friday froze assets belonging to jailed media tycoon Jimmy Lai, including all shares in his company, Next Digital – the first time a listed firm has been targeted by national security laws in the financial hub.

Also among assets targeted were the local bank accounts of three companies owned by him, Hong Kong’s Secretary for Security John Lee said in a government statement.

The statement, issued after the market close, said Lee had issued notices “in writing to freeze all the shares of Next Digital Limited held by (Jimmy) Lai Chee-ying, and the property in the local bank accounts of three companies owned by him”.

Lai was sentenced to 14 months in prison for taking part in unauthorized assemblies during pro-democracy protests in 2019.

He faces three alleged charges under a sweeping new national security law imposed by Beijing, including collusion with a foreign country.

The move against his assets was also made under the security law, which criminalizes acts including subversion, sedition, collusion with foreign forces and secession with possible life imprisonment.

The decision by authorities to use the law’s powers for the first time to target a Hong Kong listed company could have repercussions for investor sentiment.

There have been signs of capital flight since the law was imposed last June, to foreign countries including Canada, according to government agencies, bankers and lawyers.

Beijing said it imposed the law on the former British colony to restore order after months of pro-democracy, anti-China protests in 2019.

However, critics say the law has been used by China’s Communist leaders to suppress freedoms and pro-democracy campaigners – scores of whom have been arrested and jailed, or have fled into exile.

The chief executive officer of Next Digital, Cheung Kim-hung, told the Apple Daily that Lai’s frozen assets had nothing to do with the bank accounts of Next Digital, and that their operations and finances would not be affected.

The firm’s employees pledged to continue to “uphold their duty and keep reporting”, in a statement posted on the Facebook page of Next Digital’s trade union.

Under Hong Kong stock exchange filings, Lai is Next Digital’s major shareholder and holds 71.26 percent of shares that were worth around HK$350 million ($45 million) based on Friday’s closing share price.

The value of the other “property” assets frozen by the authorities was not immediately clear.

Next Digital runs the Apple Daily, Hong Kong’s most influential pro-democracy newspaper that has long been a thorn in the side of Hong Kong and Chinese authorities.

Senior Hong Kong officials have recently warned Apple Daily about its coverage and have spoken of the possible introduction of a “fake news” law. Critics say this is all part of an ongoing crackdown on the city’s media.