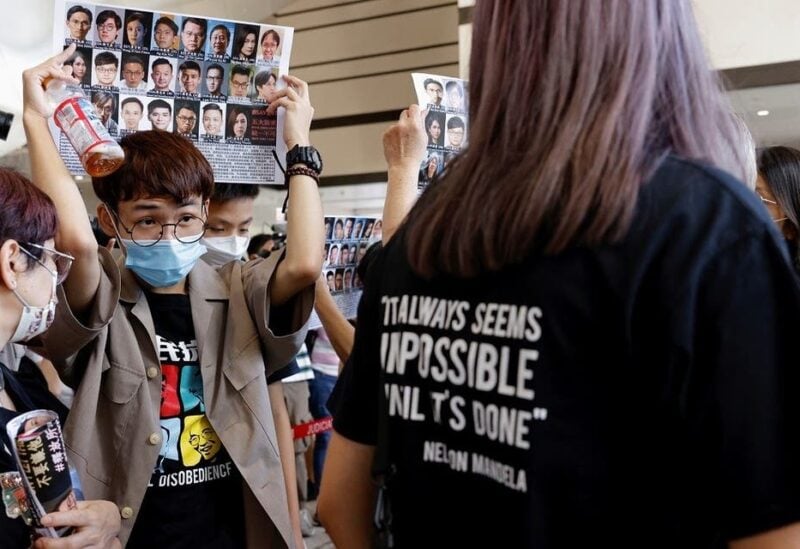 Supporters hold up placards among people queuing up at the West Kowloon Magistrates’ Courts for a hearing of 47 pro-democracy activists charged with violating the national security law, in Hong Kong, on July 8, 2021. (Reuters)

The five — four males and one female — were arrested on suspicion of conspiring to plan terrorist activities under a sweeping national security law imposed by Beijing a year ago as part of a crackdown on dissent in the former British colony, which has enjoyed freedoms not experienced on the Chinese mainland.

Last week, police arrested nine people, including six students, accused of planning to manufacture and plant explosives around the city, including in courts, cross-harbor tunnels and trash cans.

Police said then that they found chemicals in a makeshift laboratory for the manufacture of the explosive triacetone triperoxide, or TATP, which has been widely used in bombings in Europe and elsewhere.

Police on Monday said they did not rule out further arrests in relation to the case.

Hong Kong authorities have used the national security law, enacted in response to anti-government protests that rocked the city in 2019, to arrest many of the city’s prominent pro-democracy activists. Others have fled abroad.

Since the 2019 protests, Hong Kong police have arrested several people in connection with alleged bomb plots and manufacture of TATP, including 17 detained that year in raids that also seized explosives and chemicals.

The arrests come as China is increasing its control over Hong Kong, despite a promise to protect the city’s civil liberties for 50 years after its 1997 handover from Britain.

As part of that campaign, police arrested at least seven top editors, executives and journalists of the pro-democracy Apple Daily newspaper and froze its assets, forcing it to close over two weeks ago.