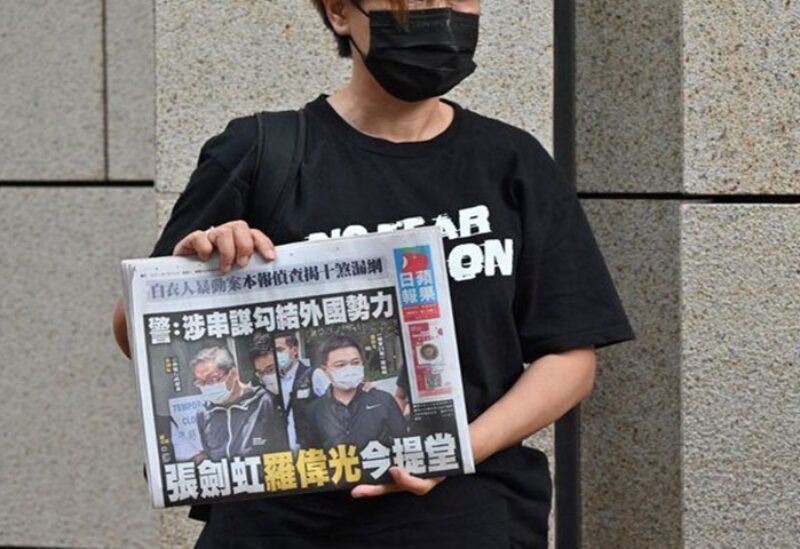 The World Association of News Publishers has presented a coveted press freedom prize to Jimmy Lai, a jailed Hong Kong media magnate, and the employees of his now-defunct Apple Daily newspaper.

Apple Daily, previously Hong Kong’s most popular pro-democracy newspaper, went bankrupt in June when authorities froze its assets under a national security regulation enforced by Beijing in an attempt to quell dissent.

Lai, the paper’s outspoken founder, as well as other top executives and editors, have been arrested on “foreign collaboration” accusations in connection with Apple Daily’s advocacy for international sanctions against China.

According to Warren Fernandez, president of the World Editors Forum, this year’s Golden Pen of Freedom award emphasized the “fears and struggles” of journalists in Hong Kong, a regional media hub.

“The arrest of an editor-in-chief and his senior colleagues, the closing of a newsroom, and the closure of a media title – the 2021 Golden Pen award recognizes and reflects on all of these,” Fernandez said at a virtual ceremony on Wednesday.

Apple Daily was well-known for its scathing criticism of Chinese officials, and Beijing made no secret of its aim to quiet the newspaper.

Sebastien Lai, accepting the prize on behalf of his father, stated that with the closure of Apple Daily and the growing assault on media in the region, there will be “fewer and fewer individuals pouring light in these dark places.”

The World Association of News Publishers described Lai as a “outspoken opponent of Beijing’s authority over Hong Kong and a high-profile backer of the pro-democracy movement” in a statement announcing the prize.

The Golden Pen of Freedom, established in 1961, is an annual prize that celebrates extraordinary efforts to the defense and development of press freedom.

Hong Kong has traditionally been a regional media powerhouse, but in recent years, as Beijing exercises increasing authority over the city, it has fallen down press freedom rankings.

Following massive and frequently violent democratic protests two years ago and the subsequent adoption of the security law, repression of local media has grown.

The city has a considerable international media presence, with organizations like as the Financial Times, AFP, CNN, the Wall Street Journal, and Bloomberg having regional offices there.

However, the security bill and crackdown on opposition have set off alarm bells.

An Australian correspondent for The Economist was denied a visa last month, making her the fourth international journalist to be denied one without reason since 2018.

Last year, the New York Times moved its Asia reporting base to South Korea, citing both the security law and frequent visa delays.