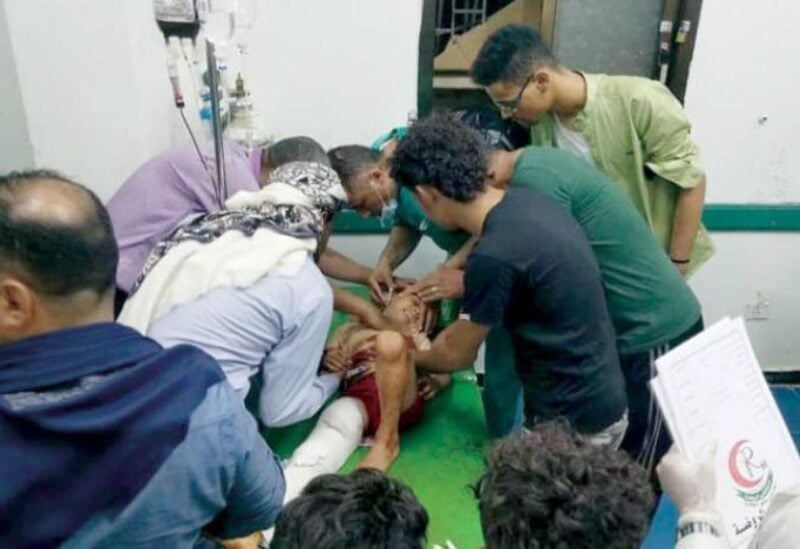 A Houthi militia attack that hit a residential neighborhood in Taiz, killing and injuring children, has angered human rights defenders in Yemen with the government calling for more pressure on the Iran-backed group to get it to commit to the UN-sponsored truce before it expires on August 2.

The Houthi attack on al-Rawda neighborhood injured 11 boys and girls, mostly under the age of 10, and one of the boys later died of his injuries. Some of the children are in critical condition.

The shelling launched by Houthi militias represents the latest violation of the UN-backed truce.

The Houthis have been besieging Taiz for seven years now.

For its part, the National Alliance of Yemeni Political Forces fiercely condemned the attack which took place as UN envoy Antony Hayward was visiting Taiz.

The Alliance, which encompasses political parties backing the internationally recognized government in Yemen, labeled the attack as “shameful and inhumane.”

It called on Yemen’s Presidential Leadership Council (PLC) and government to move quickly to protect and support every group that is subjected to injustice and persecution.

The Alliance also demanded support for any popular movement that revolts against Houthis and defends the right of Yemenis to life, freedom, and human dignity.

In a statement on Sunday, Yemeni parties collectively voiced their regret over what they labeled as international “impotence” in the face of continued Houthi attacks and violations of the UN truce in several Yemeni governorates.

Yemeni parties pointed to the people’s suffering “as a result of the Houthi militia’s continuous and comprehensive war on everything in the country.”

For over eight years, Houthis fought human development in Yemen with daily acts of terrorism that inhibit Yemenis from having a normal life.

Yemeni parties slammed the international community for binding the government to agreements at a time when it is failing to get Houthis to show any kind of commitment.

They called on UN Special Envoy to Yemen Hans Grundberg to play his role in the face of the daily violations committed by Houthi militias.