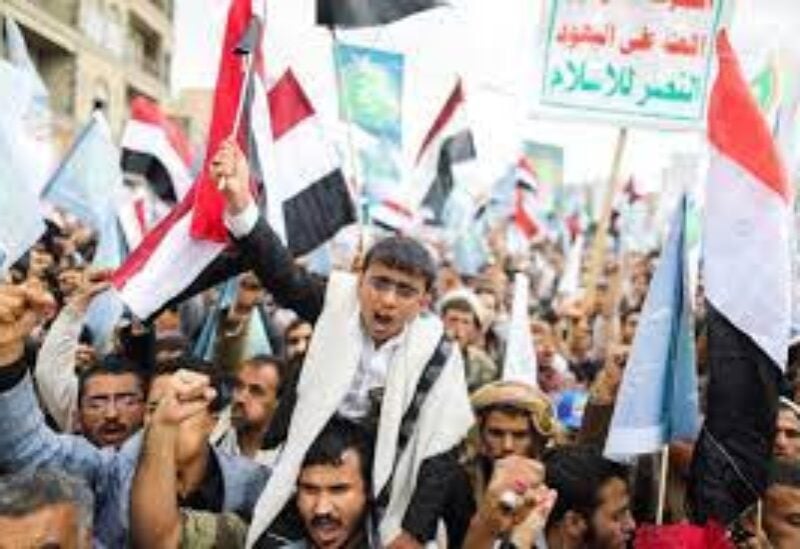 Thousands of Houthi sympathizers gathered in Sanaa, Yemen’s capital, on Tuesday to mark the seventh anniversary of the group’s overthrow of the government, as the group’s forces advanced across frontlines in the country’s oil-producing areas.

When the internationally recognized administration of President Abd-Rabbu Mansour Hadi was deposed in 2014, the Iran-aligned movement stormed through the capital and much of north Yemen.

In 2015, Saudi Arabia and the United Arab Emirates intervened in the fight to restore Hadi’s government to power, but the conflict has continued to rage, killing tens of thousands and producing the world’s greatest humanitarian catastrophe.

A large crowd gathered in Sanaa’s key public squares, waving the red, white, and black national flags and screaming anti-Saudi, anti-Israel, and anti-US chants. “Death to America” was written on several of the placards.

“These are beautiful days in Yemeni history; it’s as if we’ve been reborn because we stood up… against the aggressors,” said Hamdi Ziyad, a demonstrator.

Houthi leader Khaled al-Madani told the cheering crowd that it was the anniversary of “freedom and independence”.

Traditional Yemeni dancers performed on the main podium while many carried pictures of Houthi leaders Abdulmalik al-Houthi and Saleh al-Samad.

Samad, who held the post of president in the Houthi-controlled administration which runs most of northern Yemen, was killed in April 2018 by a Saudi-led coalition air strike in the port city of Hodeidah on Yemen’s west coast.

The Houthis executed nine men on Saturday following their conviction for involvement in his killing, causing a global outcry.

Similar pro-Houthi rallies were also reported on Tuesday in northern provinces including Saada, Hodeidah and Emran.

Meanwhile, Houthi forces pushed through frontlines and made advances in several districts in the central region of Marib and the southern area of Shabwa, military officials told Reuters.

Houthi fighters seized the Bayhan district and advanced towards Assilan in Shabwa, where Janna oil field is located, and attacked Hareb district in Marib, they said.

The talks are focused on measures to lift a blockade on Houthi-held ports and Sanaa airport in return for a Houthi commitment to a ceasefire.