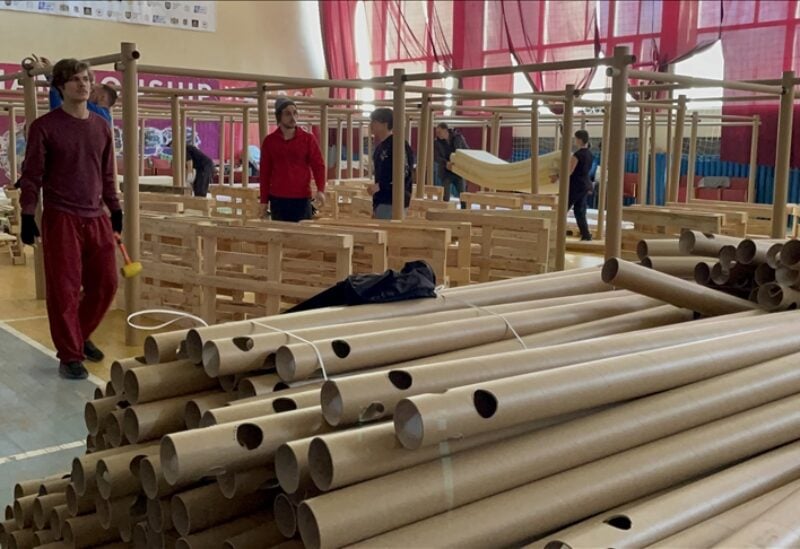 Amid Russia’s ongoing attacks on Ukraine, Volunteers in the western Ukrainian city of Lviv, set up on Thursday, a makeshift temporary refugee center for war victims who flocked there the country.

The temporary shelter, located in a gym on the grounds of the Lviv University Veterinary School, went operational after just three hours of effort.

Fleeing the ongoing war in the capital Kyiv, Alexander Keedeesuk came to Lviv to take shelter at the center, which can host hundreds of people.

“We used to stay in an open area as part of the crowd. But now it’s divided into rooms. It became much more organized. This way we can be more comfortable,” Keedeesuk told Anadolu Agency.

“We get news of death every day. Our citizens are dying, our soldiers protecting us are dying. We used to be brothers with Russia. But they ended this brotherhood and became soldiers of the devil,” he said.

Only about 70 kilometers (43 miles) from the border of Poland, a NATO member, Lviv is seen by many as safer than the rest of the country, though an airport near Lviv has come under attack.

At least 977 civilians have been killed so far in Ukraine and 1,594 injured, according to UN estimates, while cautioning the true toll is likely much higher.

Over 3.6 million Ukrainians have also fled to neighboring countries, according to the UN refugee agency.