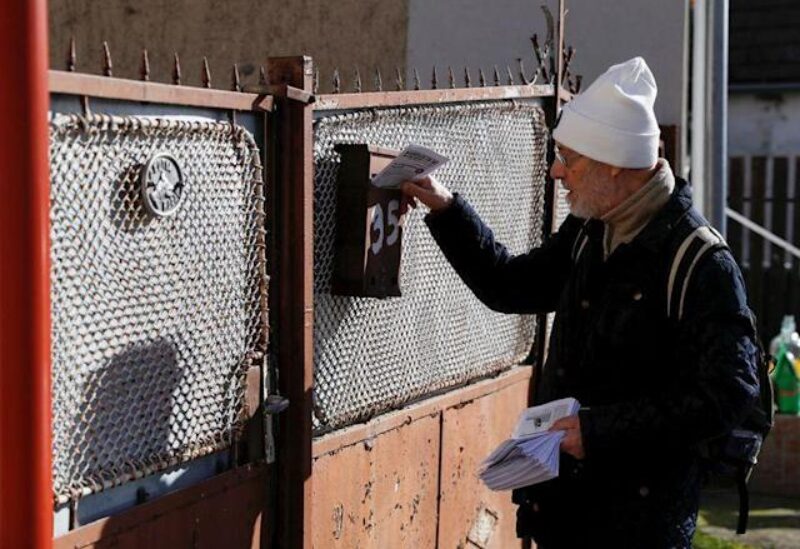 Every Wednesday, 79-year-old Peter Nogradi pounds the streets of a small town on the Danube river, putting a newsletter into mailboxes as part of a campaign by Hungary’s Prime Minister’s opponents ahead of April elections.

The modest A4 sheet, folded in half and printed in black-and-white, bills itself as a weekly “newspaper” and comprises content chosen by activists from websites. More than 1,300 volunteers distribute it around Hungary with the goal of bringing news items to the notice of a rural readership that, according to organizers, can only access media loyal to the government.

The Feb. 1 edition in Nogradi’s hands covers news about corruption, a teachers’ strike for higher wages and the opposition’s plans to cut VAT on basic foods if elected.

“This news does not appear in the mass media, you can only read it on the internet but not on all websites,” he says.

Small villages where people mainly get their news from television or radio, and media channels controlled by the government, are traditional strongholds for Prime Minister Viktor Orban’s Fidesz party. Orban, who rose to power 12 years ago with a landslide, faces a tight race for reelection on April 3 and media coverage plays a key role in his campaign.

In the freezing cold, the streets of Dunabogdany, north of Budapest, are empty. Nogradi, who worked as a software developer before he retired, says some are happy to pick up his leaflets, while others bin them right away but this does not put him off.

The leaflets, called Nyomtass Te Is! (You Should Print, Too!), are a non-party initiative that organisers have termed “21st century samizdat.” Samizdat was the secret copying and distribution of banned literature during communist times. That Hungarians are resurrecting the tactic is a reflection of Orban’s stranglehold over state and private media, say organizers.

The movement gathered pace in October after opposition leader Peter Marki-Zay endorsed it, saying he himself used to deliver the leaflets near his hometown.

“It is very important to balance out government propaganda with real news,” Marki-Zay said.

A government spokesman said the Hungarian and international left had been using the issue of media as part of its political campaign “to discredit Hungary” for over a decade.

“The reality is that the diversity and balanced nature of Hungarian media is a bright spot compared to what we can see in Western Europe,” Zoltan Kovacs told Reuters in emailed comments.

Marki-Zay, a 49-year-old Catholic conservative, father of seven, leads a six-party alliance against Orban and opinion polls show a tight race with Fidesz, which is just a few percentage points ahead.

By mid-January NTI had more than a thousand volunteers, up from about 150 in October, distributing about 150,000 copies during the last week of January, organisers said.

“We would need 3,500 people to reach the around 2 million people living in villages with 2,000 to 5,000 inhabitants,” said Rita Bolla, a volunteer leader in Budapest.