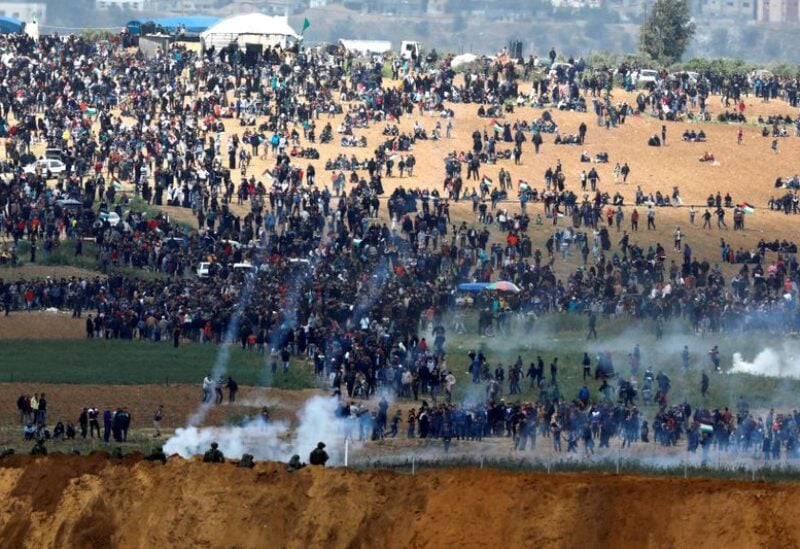 FILE PHOTO: Israeli soldiers shoot tear gas from the Israeli side of the Israel-Gaza border, as Palestinians protest on the Gaza side of the border, March 30, 2018. REUTERS/Amir Cohen/File Photo

The International Criminal Court prosecutor said on Wednesday her office will formally open an investigation into war crimes in the Palestinian Territories, a move lauded by the Palestinian Authority and condemned by Israel.

The decision comes after the court ruled on Feb. 5 that it has jurisdiction in the case, prompting swift rejection from the United States and Israel.

“The decision to open an investigation followed a painstaking preliminary examination undertaken by my office that lasted almost 5 years,” outgoing Prosecutor Fatou Bensouda said in a statement.

“In the end, our central concern must be for the victims of crimes, both Palestinian and Israeli, arising from the long cycle of violence and insecurity that has caused deep suffering and despair on all sides,” the prosecutor added.

“My office will take the same principled, non-partisan, approach that it has adopted in all situations over which its jurisdiction is seized.”

Bensouda, who will be replaced by British prosecutor Karim Khan on June 16, said in December 2019 that “war crimes have been or are being committed in the West Bank, including East Jerusalem, and the Gaza Strip”. She named both the Israeli Defense Forces and armed Palestinian groups such as Hamas as potential perpetrators.

The next step will be to determine whether Israel or Palestinian authorities have investigations themselves and to evaluate those efforts.

Israel’s government on Wednesday considered the court to be “morally and legally bankrupt”.

In a statement, Foreign Minister Gabi Ashkenazi said “the decision to open an investigation against Israel is an exception to the mandate of the tribunal, and a waste of the international community’s resources by a biased institution that has lost all legitimacy.”

There was no immediate comment from Israeli Prime Minister Benjamin Netanyahu. When the court ruled on jurisdiction, he said: “When the ICC investigates Israel for fake war crimes, this is pure antisemitism.”

However, the Palestinian Authority praised the prosecutor’s probe.

It is “a long-awaited move that serves Palestine’s tireless pursuit of justice and accountability, which are indispensable pillars of the peace the Palestinian people seek and deserve”, the PA foreign ministry said in a statement.

The Islamist militant group Hamas defended its own actions in the conflict.

“We welcome the ICC decision to probe Israeli occupation war crimes against our people. It is a step forward on the path of achieving justice,” Hazem Qassem, a Hamas spokesman in Gaza, told Reuters.

The ICC is a court of last resort established to prosecute war crimes, crimes against humanity and genocide when a country is unable or unwilling to do so.

The prosecutor’s office was targeted by sanctions under former US President Donald Trump in response to its investigation in Afghanistan, which is examining the role of US forces.