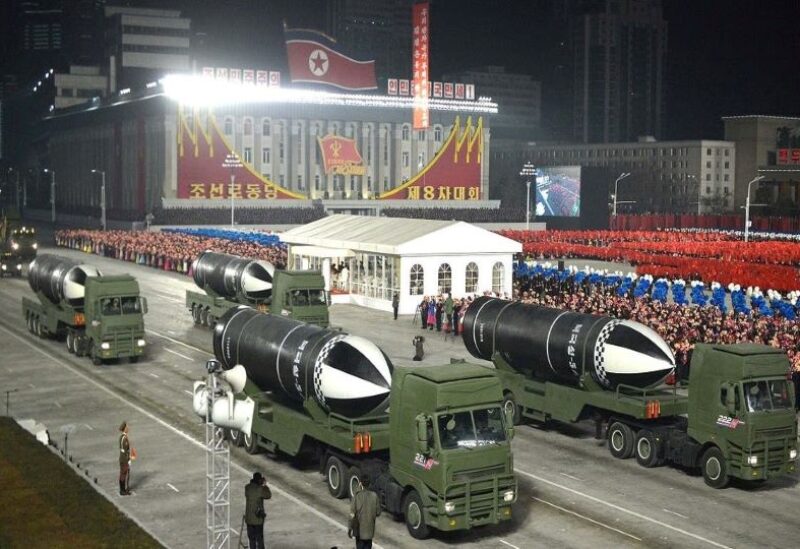 Military equipments are seen during a military parade to commemorate the 8th Congress of the Workers' Party in Pyongyang, North Korea

A Washington think tank claimed on Thursday that commercial satellite footage showed apparent preparations for a military parade in North Korea, amid predictions that the nation could demonstrate significant military breakthroughs or fire additional missiles during the forthcoming holidays.

Several hundred people were spotted in formation at Pyongyang’s Mirim Parade Training Ground, which is supposed to be a duplicate of the city’s Kim Il Sung Square, where parades are generally conducted, according to 38 North, a North Korean monitoring organization.

According to the report, more than 240 buses were parked nearby, but there was no trace of big military gear, such as North Korea’s ballistic missiles.

“That might imply that a forthcoming event will be mostly made up of people, or that they have yet to arrive,” 38 North explained.

The allegation comes only a day after Seoul-based NK News, which monitors North Korea, claimed knowledgeable sources and satellite data indicating likely parade preparations, including jet planes above Pyongyang and marching formations at the training site, since late January.

Both are big festivals in North Korea, which frequently utilizes such occasions to demonstrate military power with enormous parades of goose-stepping soldiers and rows of armaments, including large missiles in certain cases.

“North Korea does not advertise these kind of activities in advance, but over the previous few years, training at the Mirim Parade Training Ground has often began one to several months ahead of the festivities,” according to the 38 North article.

North Korea conducted a record seven missile tests in January and has hinted that it may restart testing of its longest-range intercontinental ballistic missiles or nuclear bombs for the first time since 2017 due to delayed disarmament discussions with the US.

According to analysts, North Korea may use the holidays to test a significant new missile or other weapon.