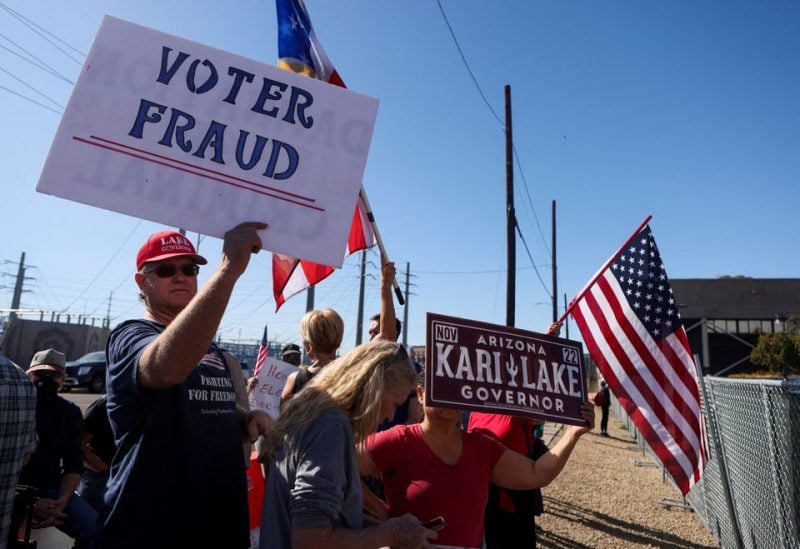 Republican candidates and activists pushing fictitious claims of voter fraud aren’t going away as Arizona counties have until Monday to certify the results of the midterm elections.

When the legislature reconvenes in January, state senator-elect Jake Hoffman, the leader of Arizona’s Freedom Caucus, a group of largely pro-Trump Republican state lawmakers, told Reuters that he would oversee an investigation into the state’s election.

Hobbs “will never be considered legitimate,” said Bannon, who has been providing Lake counsel. “That’s going to cripple her ability to govern. So that’s why this is a crisis. There’s a crisis for the entire state.”

Lake, a vocal supporter of former President Donald Trump, was one of dozens of Republican candidates who questioned or denied the outcome of the 2020 presidential election and lost in the midterms.

The defeat of Lake and other election deniers was seen as a powerful rebuke of candidates who echoed Trump’s myths of a stolen election.

Lake, however, has remained defiant after her 17,116-vote loss.

“We know we WON this election and we are going to do everything in our power to make sure that every single Arizonan’s vote that was disenfranchised is counted,” Lake said in an interview posted on her Twitter account on Saturday.

Lake’s team filed a lawsuit in state court on Wednesday against Maricopa County, demanding information on voters whose ballots were affected by voting machine problems. Her Republican colleague, Abe Hamadeh, who ran for attorney general and lost by 510 votes, has filed a lawsuit against his Democratic opponent as well as state and local officials, seeking to overturn his defeat.

In Maricopa County, tabulators at 71 of 223 polling stations were unable to read ballots because of printer ink problems on Election Day.

County officials said the issue was quickly addressed. Affected voters could deposit ballots in a secure on-site container called “box three” or wait for another ballot or travel to another polling center.

Republican activists urged voters not to use the secure box on Election Day, according to Maricopa County officials. Some activists expressed concerns on social media that ballots placed in secure boxes would not be counted.

“It certainly was not helpful as far as we were concerned because it was contradicting the official elections department information that we were trying to get out to voters in real time,” said Maricopa County spokesman Jason Berry.

Rejecting the secure boxes backfired, said David Becker, executive director of the nonpartisan Center for Election Innovation and Research. “If they followed instructions, there would’ve been no lines. There would’ve been no delays. They would’ve moved through the process very, very effectively.”

The technical issues at Maricopa were not rare, according to Becker, who consults Republican and Democrat election officials across the nation, and they happen at hundreds of polling places nationwide every election.

According to Maricopa officials, the printer ink issue had an influence on around 17,000 voters.

Maricopa County was due to certify election results on Monday. On Sunday, the county produced a report outlining the number of voters in each location on Election Day.