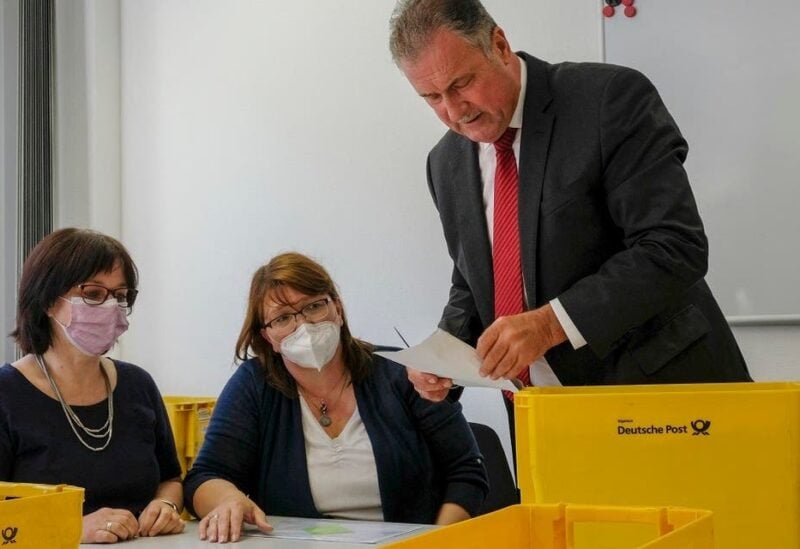 The chairman of the German train drivers' union GDL Claus Weselsky looks at an envelope of ballots before GDL members count the votes on possible strikes at Deutsche Bahn, on August 9, 2021 at the GDL headquarters in Frankfurt, western Germany. (AFP)

German train drivers voted to go on strike from Tuesday over a wage dispute, their union said, in a blow for summer vacationers and adding to logistics and supply woes already plaguing the industry.

The walkout will affect cargo trains from 7 pm (1700 GMT) on Tuesday, before extending to passenger traffic at 2 am on Wednesday, said the leader of the train drivers’ GDL union, Claus Weselsky.

Some 95 percent of union members had voted for the first round of industrial action, which is due to end on Friday.

“We intentionally chose this timeframe in the week to limit the impact on weekend and holiday traffic,” said Weselsky.

Train operator Deutsche Bahn had offered to phase in a 3.2-percent wage increase in two steps but the two parties were unable to agree on when the hikes would apply.

DB condemned the call for industrial action, saying that it was a “slap in the face” for passengers at a time when huge efforts were already being made to counter the impact of the coronavirus pandemic.

Besides suffering losses on shrinking passenger traffic during the Covid-19 health emergency, Deutsche Bahn was also struggling to rebuild kilometres of tracks destroyed by deadly floods that struck western Germany in mid-July.