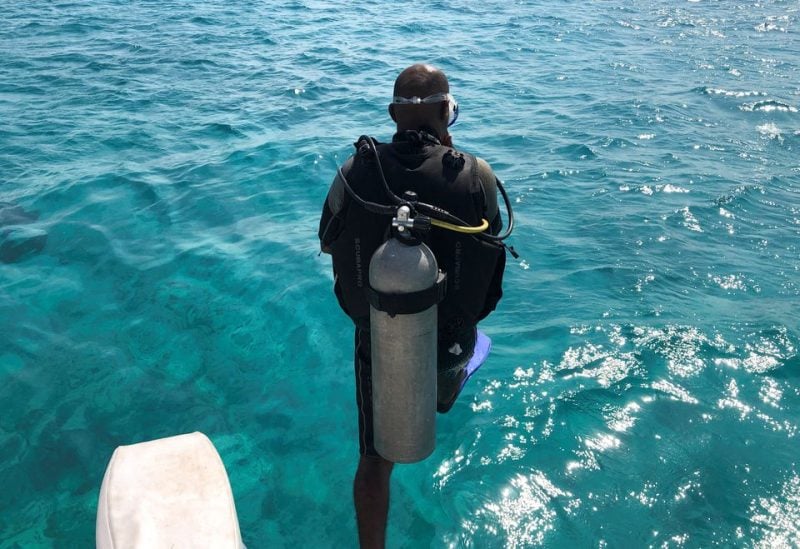 [1/3] A HEPCA's diver jumps into water to do mooring underwater in the Red Sea resort of Hurghada, Egypt October 20, 2022. REUTERS/Sherif Fahmy

Egypt will host the COP27 climate summit next month in a Red Sea resort where climate change and human activity are endangering one of the world’s most valuable coral reefs.

Egypt’s coral reefs fringe coastal towns such as Hurghada, Marsa Alam, and Sharm el-Sheikh, where the United Nations conference will be held from November 6 to 18.

These Red Sea reefs, which make up about 5% of the global reef cover, contain the most diversity of species outside of Southeast Asia.

But many of the world’s reefs now face an “existential crisis”, with 14% lost between 2009 and 2018 as climate change warms the ocean’s surface and increases acidification while human development drives tourism, overfishing and coastal construction that can foul waters, according to the Global Coral Reef Monitoring Network.

As invertebrates, corals secrete calcium carbonate to build up their protective skeletons, where algae take up residence, giving the corals brilliant colour while providing the coral with energy. But corals are also temperature sensitive, and a change of just 1-2 degrees Celsius can cause them to expel their algae, leaving behind the white skeletons seen in “bleaching” events.

That may be because they have become conditioned to big swings in temperature due to seasonal shifts in the gulfs of Aqaba and Suez. It could also be that water currents are limiting the impact of warming in the area, he said.

“We have in Egypt coral reefs that will be among the last remaining in the world, which means it will provide hope for humanity that a unique ecosystem like this remains alive,” Hanafy said.

But the Red Sea reefs face other threats, including scuba divers.

The area sees up to 9 million dives across about 258 spots each year, with some spots taking more divers than appropriate, Hanafy said. That can disturb marine life and lead to damage of reef structures. Decades of coastal development have also taken a toll.

One conservation group has installed more buoys along the coast, to prevent boats from dropping anchors that can destroy corals.

“If you compare the coast in the 1980s and now, it’s changed greatly, large areas of coral reefs have been buried,” said Mostafa Abdellah, who heads the mooring project for the Hurghada Environmental Protection and Conservation Association.

The group also has a programme to tackle widespread plastic pollution by collecting waste from resorts, coastal cities and hotels, and hopes to relieve pressure on some coral reefs by sinking boats to create alternative diving spots.

“The sea will not be in good shape unless the situation on the land is in good shape as well,” said Nour el-Din Mohamed Farid, the group’s managing director.