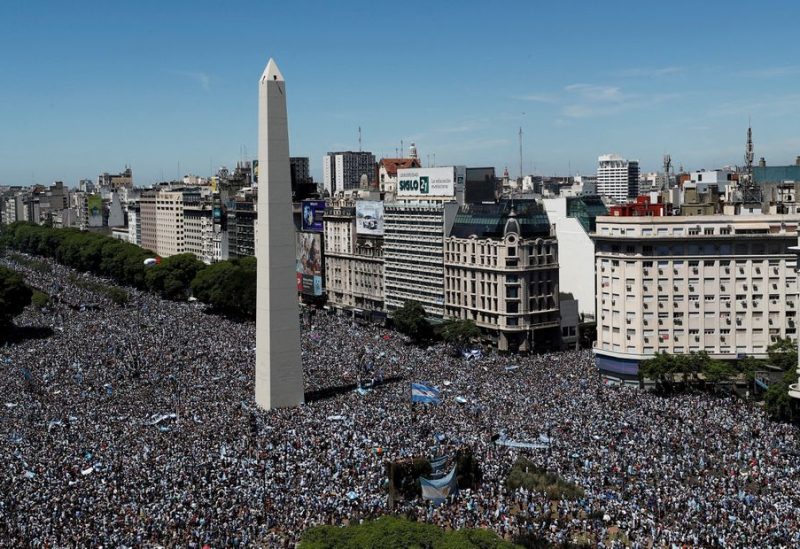 Argentina Victory Parade after winning the World Cup - Buenos Aires, Argentina - December 20, 2022 General view of the Obelisco as Argentina fans are seen ahead of the victory parade REUTERS

Gregorina Victorica, 86, a retired woman in Buenos Aires, has been celebrating Argentina’s win in the World Cup, which has cheered up the South American country and offered happiness to those who have been negatively impacted by rising costs and the economy.

However, reality is biting with inflation rising towards 100%, strict capital controls, near 40% poverty, and worries of further debt defaults on the horizon. This is despite the light of victory from a dramatic and topsy-turvy final versus France.

“The World Cup is an immense joy that revives us after suffering economic crisis for so long,” Victorica said. “But soon we will have to fall back into reality and face the situations that weigh us down every day.”

Argentina’s stirring victory, their first since Diego Maradona lifted the trophy in 1986, brought millions on to the streets on Tuesday to cheer the team led by star Lionel Messi, a release valve for frustrations at leaders failing to right the economy for years.

The crowds were so huge and delirious – with some estimates of 4-5 million people on the streets – that the open-top bus parade had to be cut short and the players transferred to helicopters to fly over the city.

But in the hazy hangover of the victory party, Argentines are coming back to earth. The major grains producing country, once one of the wealthiest nations in the world, posted annual inflation of 92.4% in November. The benchmark interest rate is 75%.

Issues of money printing, an artificially over-valued peso and low foreign reserves are sharpening. Investors worry economy Minister Sergio Massa, brought in to fix things in August, is not making enough policy reforms, with an eye on a general election late next year the government fears losing.

“Massa is just trying to play whack-a-mole, he’s desperate to not make any degree of meaningful adjustment ahead of the 2023 elections,” said Ted Mann, a senior emerging markets equities analyst at AllianceBernstein.

“Under Massa, Argentines are can-kickers extraordinaire. They are better at kicking cans than Messi is at kicking footballs.”