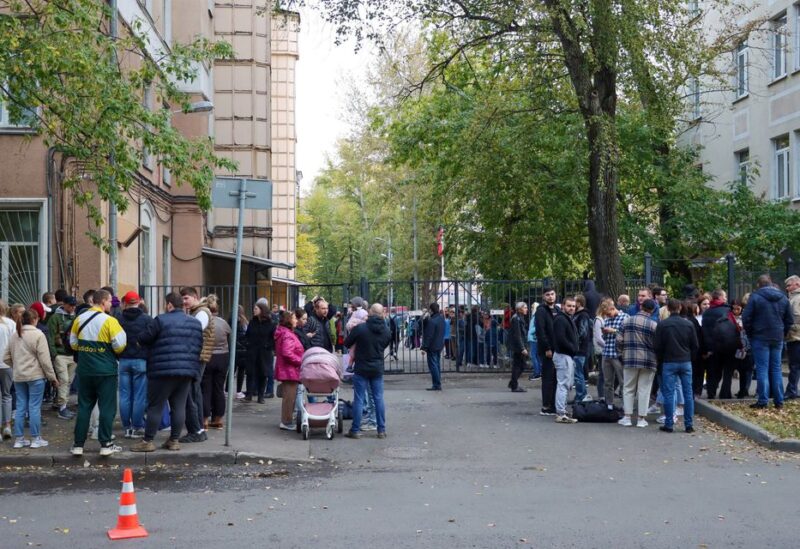 Men drafted into the Russian army during partial mobilisation say goodbye to their relatives and acquaintances outside a military commissariat in Moscow, Russia September 23, 2022. Moscow News Agency/Handout via REUTERS

In Buryatia, a mostly rural region wrapped around the southern shore of Lake Baikal, the mobilization has seen some men drafted regardless of their age, military record or medical history, according to interviews with local residents, rights activists and even statements by local officials.

Buryat rights activists suspect that the burden of the mobilization – and the war itself – is falling on poor, ethnic minority regions to avoid triggering popular anger in the capital Moscow, which is 6,000 km (3,700 miles) away.

Putin always underscores that Russia, where hundreds of ethnic groups have lived for centuries alongside the majority Slav population, is a multi-ethnic state and that soldiers of any ethnicity are heroes if they fight for Russia.

Shortly after Putin announced the mobilization on Wednesday, Defense Minister Sergei Shoigu said it was not for all citizens, just for military reservists who have previously served in the Russian army and have combat experience or specialized military skills.

Such was the outcry over the mobilization in Buryatia, though, that Governor Alexei Tsydanov on Friday issued a statement clarifying that those who had not served in the army or who had medical exemptions would not be mobilized, though he admitted that some draft notices had been given to such men.

Tsydanov wrote on Telegram: “Since this morning, 70 such people who had received summons were sent home, both from mustering points and from military units.”

If mistakes were made, he said, people should “simply inform the representatives of the military enlistment office at the collection point, with supporting documents”.

The Ulan-Ude draft office and the defense ministry in Moscow did not reply to a request for comment on the situation.