In vigil remembering Canadian Muslim family, a vow that ‘this is our city’ 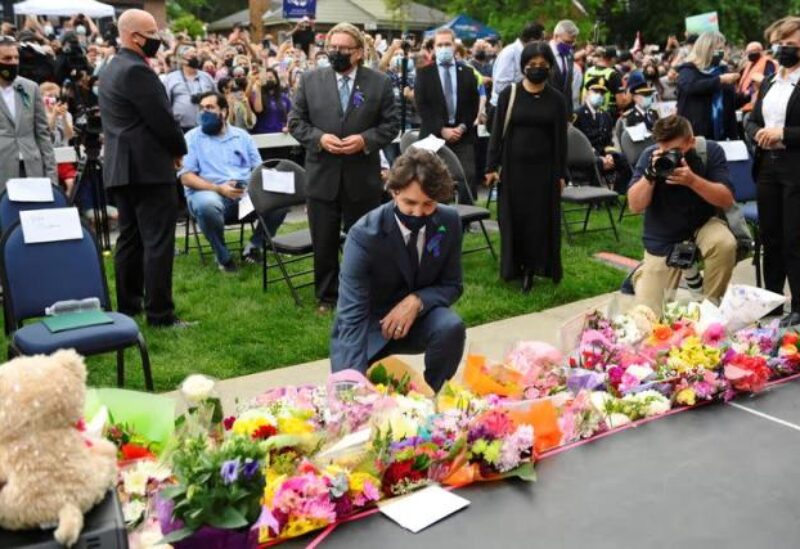 As a grieving community stood united in the middle of the crisis, Prime Minister Justin Trudeau joined thousands of mourners in a memorial Tuesday evening to honor three generations of a Canadian Muslim family killed in what police said was a deliberate hate crime.

“This is our city,” said Bilal Rahhal, the chairman of the London Muslim Mosque. “Never let someone persuade you otherwise based on the color of your skin, your faith, or your birthplace. This is our city, and we’re not leaving.”

On Sunday, four members of the family were killed while out for an evening walk near their home in London, Ontario, when a man allegedly struck them with his pick-up truck, reportedly because of their religion.

The victims included Salman Afzaal, 46, his wife, Madiha Salman, 44, their 15-year-old daughter, Yumna Afzaal, and Afzaal’s 74-year-old mother. Fayez Afzaal, their 9-year-old son, was admitted to the hospital on Tuesday with serious but non-life-threatening injuries. He was listed in stable condition.

Nathaniel Veltman, 20, of London, a city of nearly 400,000 people located 200 kilometers (124.27 miles) southwest of Toronto, has been charged with driving a pickup truck into a curb and hitting the family.

On Sunday, he was apprehended just a few hundred meters from the London Muslim Mosque, where the Afzaal family worshipped and where the vigil on Tuesday was held.

Trudeau addressed the mourning, saying that his government would take action after depositing flowers on the mosque’s steps, but he did not elaborate.

The majority of people attending wore masks, after the Ontario government made exception to COVID-19 restrictions to allow the vigil to take place.

Erin O’Toole, Canada’s opposition leader, was in attendance, as were other politicians such as NDP leader Jagmeet Singh, the first person of color to lead a federal political party in Canada, and Ontario Premier Doug Ford.

The incident has sparked a national outpouring of sadness, with vigils held in Toronto, Vancouver, and other Canadian cities.

On Tuesday evening, the #OurLondonFamily hashtag had nearly 10,000 tweets, and many people on social media altered their avatars to four white outlines of the victims on a purple backdrop with a green ribbon, as tweeted by the London Muslim Mosque.