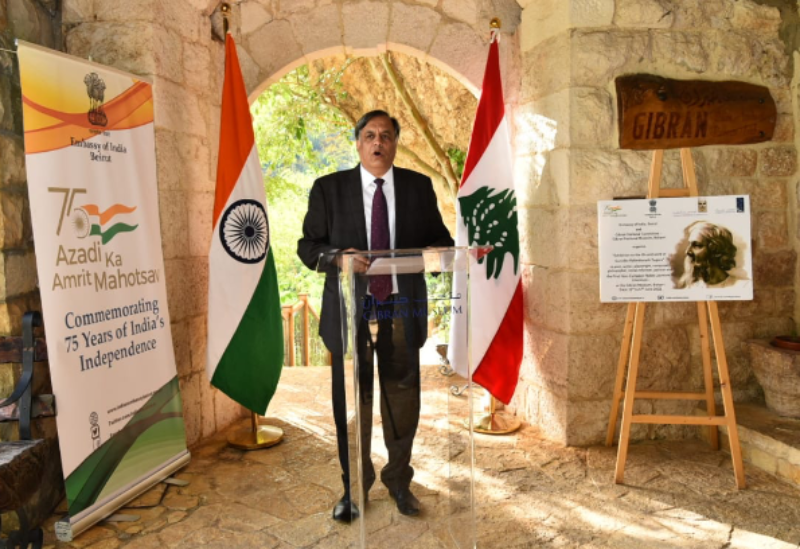 This is the first time an exhibition on the life and works of Tagore is being organized in Lebanon.

In his address, Ambassador Dr Khan thanked the Gibran Museum and Gibran National Committee for hosting the Exhibition.  Ambassador Khan mentioned about the connect between the two famous contemporary literary giants, Rabindranath Tagore and Gibran Khalil Gibran. Ambassador said, “Gibran would have loved Tagore to visit Bsharri, a town that he loved so much, where he was born and decided to rest eternally. Happy, today Tagore made to Bsharri”. He termed the Exhibition as, “meeting of the two giants after over a century”.

Comparing Khalil Gibran and Tagore, Ambassador Khan said, “ Both of them were from “East”  from “Orient” and yet they chose to address their western audience in their own language, English. Both of them were from the countries under foreign occupation at that time; Lebanon under Ottoman rule while India under British rule. Both of them had seen suffering and pain of their people, specially due to famines, in Lebanon and in Bengal from where Tagore came. Yet they decided to give their people a message of hope, peace, freedom and enlightenment”. Ambassador also added that both of them had profound impact on each other and, “In an unknowing manner, they complemented and completed each other”

Ambassador Khan also recited Tagore’s famous Poem, “Where the mind is without fear and head is held high….” . Ambassador Khan spoke about Tagore’s teachings and his philosophy and also recited a line from his famous Bengali composition,  “Jodi tor dak shune keu na ase tobe ekla cholo re”, meaning, if no one follows u, walk alone!

Head of Gibran National Committee Mr. Joseph Feninos in his address, said, “ Between Tagore and Gibran there is a cloud of intellectual partnership at the level of expressions and the overlap of phrases, conventions and concepts, as each of them addressed them to express an experience that moves within a subjective framework far from letters and words, and a window into the self.” He added, “Tagore in his poetry collections, especially “The Offering of Songs-Geetanjali” from which he read on one of his evenings in New York, converges on many humanitarian issues, with Gibran the teacher in the book “The Prophet.”

Referring to a portrait made by Gibran of Tagore Mr. Feninios said, “It is no secret that Gibran, after listening to one of Tagore’s evenings in New York 1921, took the pencil and left him a souvenir that his museum still embraces, and said in it, “Although Tagore’s face was tired that evening, it remains what he represents, Greatest Living.”

Mr. Feninios  also said that both Gibran and Tagore represent Lebanon and India to the world and give a message of pluralism, diversity, tolerance and the values of freedom, justice, and testimony to the truth.

Mr. Joseph Geagea, the Museum Director mentioned about many meetings Gibran and Tagore had starring from December 1916 till 1921 and recalled their mutual respect and admiration. The Museum Director also informed that some of Gibran’s books have been translated in Malayalam, a language of Indian State of Kerala and that his most famous book, “The Prophet” has been translated in Hindi.

As a special gesture, the Museum also exhibited other items depicting Gibran’s strong connection with India, including Gibran’s portrait of Tagore, a book presented to Gibran by Indian philosopher J. Krishnamurti & a book on Gibran by Osho.

A local priest also informed the gathering that that according to tradition one of their local prayers is  derived from Tagore’s writing.

The Exhibition will be open for public from June 12 till June 17, 2022. All visitors are invited to visit and know about the two great poets, writers, painters and philosophers.