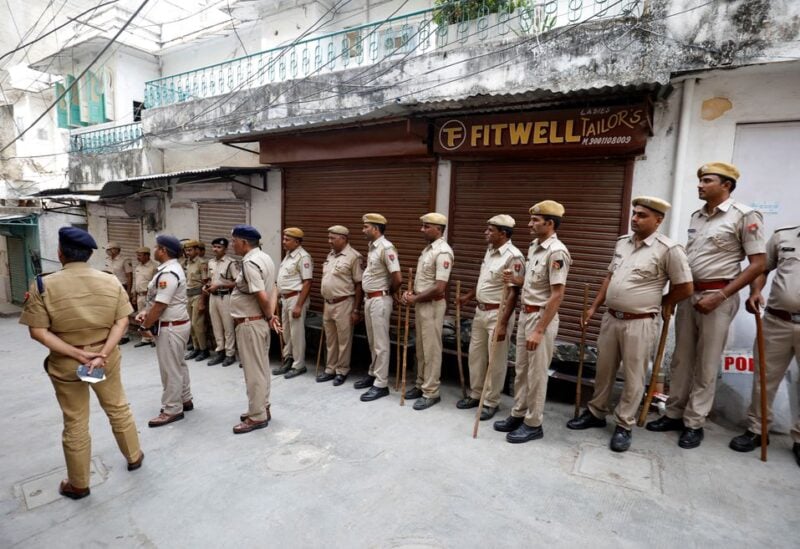 Police stand next to the shop of Kanhaiyalal Teli, a Hindu tailor, who was killed by two suspected Muslims after they videoed themselves slaying the Hindu tailor, in Udaipur in the northwestern state of Rajasthan, India, June 30, 2022. REUTERS/Amit Dave

After police apprehended more than 100 PFI members this month, India branded the Popular Front of India (PFI) Islamic organization and its affiliates illegal on Wednesday, accusing them of “terrorism” and barring them for five years.

The PFI did not immediately respond to an email requesting comment, but the Campus Front of India (CFI), its now-banned student arm, described the government action a political vengeance and misinformation.

“We are against the concept of a Hindu nation, we are against fascism, not India,” Imran P.J., national secretary of the CFI, told Reuters.

“We will overcome this challenge. We will revive our ideology after five years. We will also consider going to court against the ban.”

On Tuesday, the PFI denied accusations of violence and anti-national activities when its offices were raided and dozens of its members were detained in various states.

In a statement announcing the ban, the Ministry of Home Affairs stated that the PFI and its affiliates had “been determined to be involved in major offences, including terrorism and its funding, targeted brutal executions, and disrespecting the constitutional set up.”

Imran denies any connection to terrorism.

Modi’s party denies accusations of discrimination against Muslims and points to data that all Indians irrespective of religion are benefiting from the government focus on economic development and social welfare.

The PFI has supported causes like protests against a 2019 citizenship law that many Muslims deem discriminatory, as well as protests in the southern state of Karnataka this year demanding the right for Muslim women students to wear the hijab in class.

The ban is likely to stir an outcry among opponents of the government, which retains broad public support and a comfortable majority in parliament eight years after Modi first became prime minister.