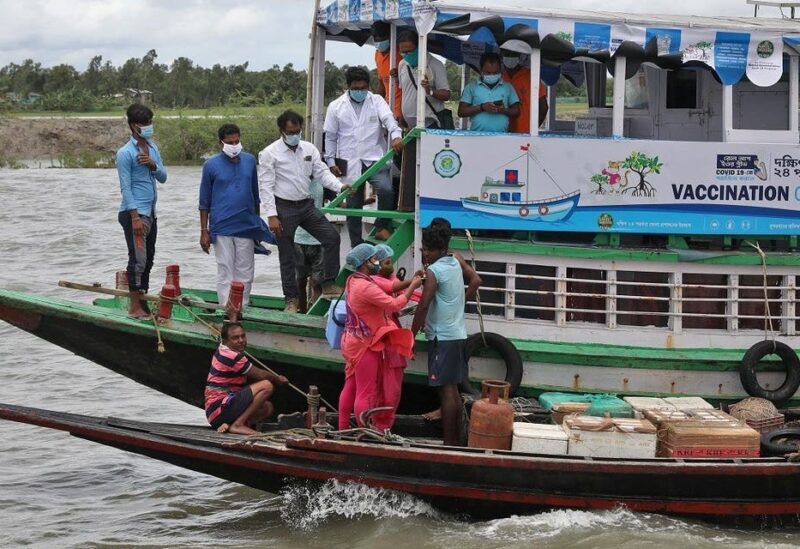 Manobesh Mondol, a fisherman, receives a dose of COVISHIELD vaccine, a coronavirus vaccine manufactured by Serum Institute of India, during ‘Vaccination on boat’ program in Bali Island in the eastern state of West Bengal, India, on July 12, 2021. (Reuters)

The Indian government rejected on Thursday recent studies suggesting that millions of people have died in the country from Covid-19, several times the official toll of almost 420,000.

It said in a statement however that several Indian states were now “reconciling” their data after dealing with a spike in cases in April and May.

On Tuesday, a study by US research group the Center for Global Development suggested anywhere from 3.4 million to 4.7 million people had died in India, between eight and 11 times the official number.

That would give the country the world’s highest number of fatalities. Currently its official toll of 419,000 trails the United States on 610,000 and Brazil with 545,000.

The study is the latest to cast doubt on India’s official numbers, pointing to poor record-keeping and the death rate per million being around half the global average.

Researchers have looked in particular at “excess mortality,” the number of additional fatalities compared with normal times, and at death rates in other countries.

But the Indian government said on Thursday it was an “audacious assumption that the likelihood of any given infected person dying is the same across countries.”

The studies, it said, ignored “factors such as race, ethnicity, genomic constitution of a population, previous exposure levels to other diseases and the associated immunity developed in that population.”

Assuming that all excess deaths were from coronavirus was “not based on facts and totally fallacious”, the government said.

It added that India has a “thorough contact tracing strategy”, a “vast availability” of testing labs and that while some cases may go undetected, “missing out on deaths is unlikely.”

The statement, however, left some room for blame against local authorities, saying the health ministry “only compiles and publishes data sent by the state governments” and that it had been “repeatedly advising” states on properly recording deaths.

States overwhelmed by the surge in April and May have now been “advised to conduct thorough audits that could have been missed”, and several have in recent weeks updated their figures, it said.