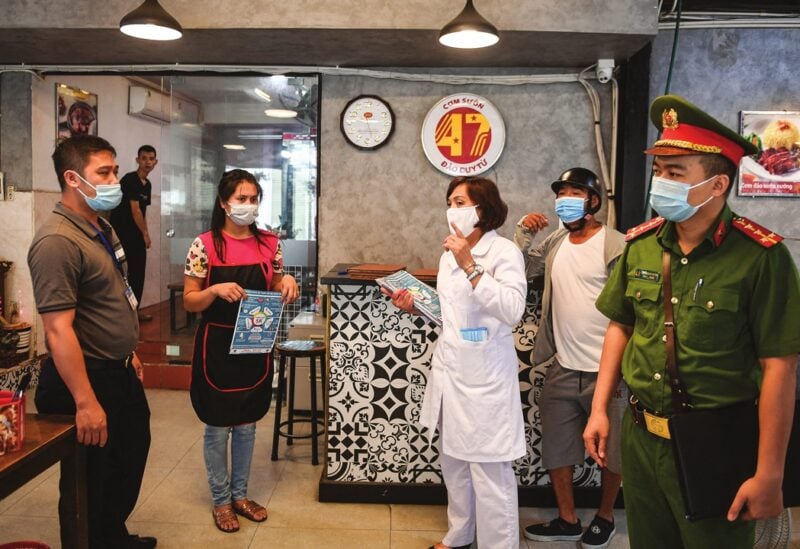 Health and local officials inspect a restaurant in Hanoi on May 25, 2021 as city authorities expanded closure orders to include restaurants dine services, barbershops and hair salons to prevent the spread of Covid-19 coronavirus. (Photo by Nhac NGUYEN / AFP)

While India is still slothful in handling its domestic virus surge caused by a highly transmissible mutated variant, COVID-19 variants that were detected in India continue to be exported to neighboring countries, triggering a wave of epidemic resurgence in more Asian countries.

Vietnam, a country once hailed as exemplary in fighting against the epidemic, is now being challenged by a suspected new coronavirus variant, a hybrid of the strains that were first detected in India and the UK, media reported.

The passive prevention and control measures by the Indian government have contributed to the variants spilling over to other Asian countries, Chinese observers said, warning India’s neighboring countries to further raise their response levels and speed up vaccine administration rates to tackle the new threats.

In just a few weeks, the B.1.617 variant has become the dominant strain across India, and now there are more than 50 countries where the variant has been detected, including Singapore, China and Nepal and Vietnam.

“A new coronavirus variant with characteristics from the existing variants in India and the UK has been detected in Vietnam for the first time,” Vietnam’s Minister of Health Nguyen Thanh Long told a national news conference on Saturday, according to CNN on Monday.

Since April, Vietnam – which was regarded as a leading example in containing the virus thanks to its strict strategy of tests, quarantine and monitoring – has recorded a sharp rise in COVID-19 infections. But it has not been determined that the new variant is behind the surge, media reports said.

A Chinese man surnamed Wang working at a Chinese enterprise in Hanoi told the Global Times on Monday that anti-epidemic measures adopted by the Vietnamese government have been very strict, similar to those in China, and this resurgence is quite gloomy.

Hanoi has yet to lock down the city but dining-in services were limited. Ho Chi Minh City will carry out mass testing and introduce new social distancing measures in response to a new cluster linked to a religious mission, Wang said.

About one-third of enterprises located in the industrial area of Bac Ninh Province have suspended operations due to the epidemic, Wang said.

The situation is not only happening in Vietnam. Some of the more-infectious variants have contributed to a surge in Malaysia, which will impose a nationwide lockdown starting in June. Health facilities in Nepal have been pushed to their limit in face of surging daily cases. The number of confirmed cases in Thailand had climbed to 159,792 as of Monday, with 82 percent recorded during the latest surge that began in early April, according to media reports.

This wave of resurgence across Asia has been largely triggered by weak anti-epidemic measures taken by the Indian government, Tian Guangqiang, an assistant research fellow with the National Institute of International Strategy at the Chinese Academy of Social Sciences, told the Global Times.

Driven by political reasons, the Modi government has blindly sought economic growth before its domestic COVID-19 cases had been cleared. Adding in factors such as the huge population flows and relatively loose virus prevention and control policies, India, like a storm center, continues to spread the virus to neighboring countries, Tian said.

Tian said that the Indian government now leans toward relying on vaccines, but the plan is being held up by its shortage of vaccine production capacity and low public willingness to receive jabs. As of press time, India had administered a total of 212 million doses, accounting for 7.8 percent of the total population.

Vietnam has administered 1 million doses, about 0.5 percent of the total population, and Nepal’s overall rate is about 4.7 percent, according to vaccine tracker data compiled by Bloomberg.

A Beijing-based immunologist, who requested anonymity, held similar opinion. The immunologist warned neighboring countries of India to further raise their response levels to tackle threats posed by the variants.

Zhuang Shilihe, a Guangzhou-based immunologist, told the Global Times on Monday that compared with the EU and the US, the inoculation rates in Asian countries are relatively low, which could mean that low immunity barriers against COVID-19 are making these countries more susceptible to the mutated strains.

Wang told the Global Times that many Chinese living in Vietnam are yearning for the “spring sprout” program launched by the Chinese government to receive jabs, as it is a necessary measure for business to resume in the country.

To fend off the risks of a resurgence and imported cases, China has been accelerating its mass vaccination drive over the past month. As of Sunday, the country had administered more than 639.2 million doses, and since May, the average inoculation rate reached 12.47 million doses per day.

Yang Zhanqiu, a deputy director of the Pathogen Biology Department at Wuhan University, also called for caution to prevent the new strains from circulating around Asia, given that the fact that the virus will not stop mutating by itself.

Yang told the Global Times on Monday that the hybrid of strains detected in Vietnam is beyond expectations as it usually takes years for a coronavirus to mutate and generate new variants. The hybrid of strains could mean a higher transmission rate and faster infection speed, Yang said, noting that no scientific data has supported this theory at present.