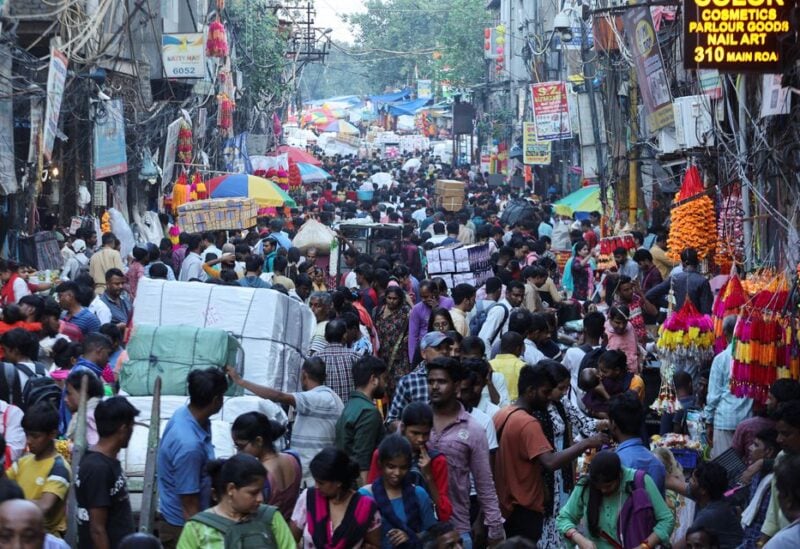 People shop at a crowded market ahead of Diwali, the Hindu festival of lights, in the old quarters of Delhi, India, October 11, 2022. REUTERS/Anushree Fadnavis

Indian consumers are buying everything from cars, houses, and television sets to travel and jewelry during the festive season, which began last month, providing a boost to growth prospects despite global economic gloom, according to early data.

Online and offline sales during the Hindu festival period starting in the last week of September and lasting until early November are estimated to cross $27 billion, almost double the amount in the same pre-COVID period in 2019, and nearly 25% higher than last year, according to industry estimates.

The sales would include nearly $15.2 billion offline sales, compared to about $8.5 billion in 2019, according to the Confederation of All India Traders (CAIT). This year there will also be $11.8 billion worth of sales on online platforms like Amazon and Walmart’s Flipkart, according to Redseer, a market consultancy.

Retail sales always peak during October-November, when the nation of 1.4 billion celebrates the major festivals of Dussehra and Diwali. It’s also an auspicious time of year to get married, according to Hindu belief.

But the surge this year is much larger, mainly due to pent- up demand as COVID-19 recedes after two years of devastating the country, as well as a rise in wages and an increase in jobs as the economy recovers, said industry leaders.

“After two years of pandemic fatigue, Indian consumers are upbeat ahead of the festivals,” said Sanjay Kothari, associate partner at Redseer, adding online sales rose by nearly one-fifth in the first week of the season compared to last year.

With a four-fold rise in online buyers since 2018 to nearly 200 million, and demand for items like mobile handsets and fashion garments spreading to small towns, such sales were likely to remain strong at least for next three months, he said.

“We had not gone out of the city since the outbreak of COVID but decided to have some fun this year during the festivals,” said Manoj Kumar Das, a 53-year-old tea vendor in Bhubaneswar, the capital of the eastern state of Odisha.

Auto sales, including those of two wheelers, rose 57% during the nine most auspicious days in the Hindu calendar this month compared to last year, and were nearly one-fifth higher compared to the pre-pandemic period in 2019, according to the Federation of Automobile Dealers Associations.

In the country’s top seven cities, home sales in the September quarter rose nearly 70% from a year earlier, said a report by the JLL consultancy, as builders offered festival discounts.

The boom in India comes despite economic challenges elsewhere in the world, with broadening inflation in the aftermath of the Russia-Ukraine war and sharply higher interest rates.

Countries representing one-third of global output are expected to be in recession next year, the IMF has said.

In India too, lending rates have gone up by about 150 basis points since May as the central bank acted to combat consumer inflation which hit a five-month high of 7.41% year-on-year in September.

But economists said the sense in India was that inflation has peaked while economic activity was picking up. The bump in consumer demand is expected to support economic growth of around 6.5% in the fiscal year ending March 2023, the highest among the world’s major economies.

Retailers in Delhi’s Chandni Chowk cloth and jewellery markets, and in the states of Uttar Pradesh, Gujarat, Odisha and Kerala reported a huge pick up in demand, particularly in urban areas. Rural demand, however, remained weak due to lower wage growth compared to the cities, traders said, and possibly because of unseasonal rain in October that affected crops.

Malav Shah, Director of VTech TVS, a chain of six automobile showrooms in Ahmedabad in western India, said the reopening of educational institutions and resumption of work in offices were contributing to a surge in auto demand.

“Price hikes of vehicles and high petrol prices are challenges, but they haven’t dampened the festive sales,” Shah said.

The spending is also being boosted by credit expansion, which hit a 10-year high of 16.2% in August as firms and consumers took out loans to fund investments and purchases, according to the central bank.

The retail boom is also a boon for the government – goods and services tax collections, a barometer of consumer demand, rose 26% year-on-year in September, data showed.

Praveen Khandelwal, secretary general of the CAIT group representing over a million retailers, said sales were expected to grow around 70% compared to the pre-pandemic period as people were spending more on garments, gold, and home decoration to celebrate festivals and also buying for the marriage season.

“Consumer confidence has improved with expanding economic activities, and the country would be celebrating festivals without any fear of pandemic after two years,” he said.

Aditi Nayar, the chief economist at ICRA, the Indian arm of rating agency Moody’s, said the festival sales surge partly reflected pent-up demand but could moderate by early next year.

“After two consecutive downbeat festive seasons, consumer sentiment and spending appear to have rebounded this year… which may boost economic growth in the current quarter, but may not sustain thereafter.”