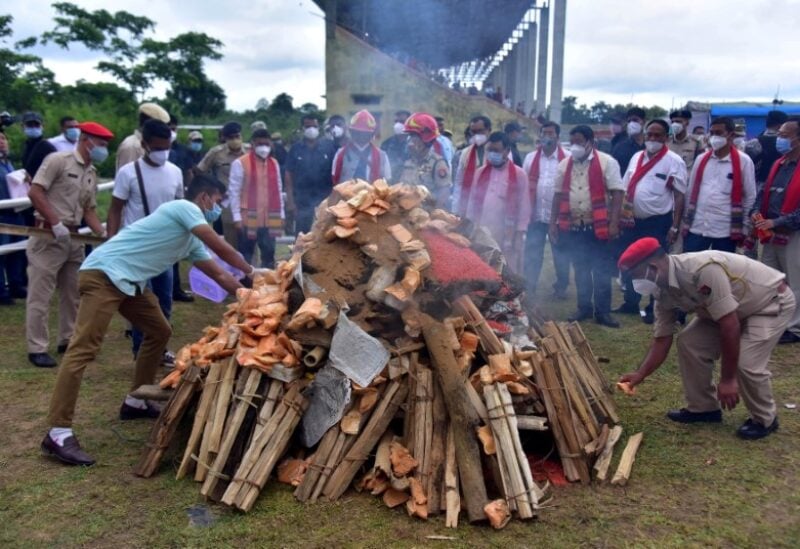 Since May, a state in northeastern India that has long been a major transit route for illicit drugs originating in Myanmar has started a significant assault on the trade, seizing record amounts and arresting nearly 2,000 people.

Assam, which shares wide and rough borders with Myanmar with four of its surrounding states, connects India’s northeast with the rest of the country. It has won plaudits from both ruling and opposition leaders for its drug crackdown, but has been chastised for alleged human rights violations, including the shooting of suspected drug dealers.

Assam’s relations with one of the states, Mizoram, have deteriorated as well, after the state connected the drug war to a recent territorial clash between the two states in which police forces exchanged gunfire.

According to police, traffickers gather or store substances such as heroin and methamphetamine in Assam, the most populous northeastern state. They estimate that around a fifth is marketed locally, with the rest going to India’s wealthier cities.

According to the International Narcotics Control Board and the United Nations Office on Drugs and Crime, Myanmar is one of Asia’s main suppliers of illegal methamphetamine, or “crazy drug” yaba, as well as heroin manufacture (UNODC).

“I hope I’m wrong, but the drug trafficking scenario in Northeast India seems a lot like it did in Bangladesh a few years ago, before methamphetamine really took off,” said Jeremy Douglas, UNODC’s Southeast Asia and Pacific regional representative.

Bangladesh, which in 2019 reported the world’s greatest seizures of prescription opioids, has emerged as the most important yaba market in South Asia, with a market worth more than $3 billion. Since 2018, police have killed hundreds of suspected narcotics dealers.

Last week, India’s junior home minister presented data on drug and arms smugglers to parliament, showing that between 2018 and 2020, India’s border with Myanmar saw more more arrests than its other neighbors, such as Pakistan and Bangladesh.

Assam this year has already made more drug seizures and related arrests than it did in any previous full year.

Much of the action has happened since an ambitious party colleague of Prime Minister Narendra Modi, Himanta Biswa Sarma, became chief minister of Assam in May and said he had given police a free hand to act on drugs, including to shoot suspects when needed.

In a speech at a public burning of seized drugs in July, Sarma remarked, “The Assam government has adopted a zero-tolerance stance against drugs.” “When necessary, I’ve instructed the police to take the most harsh legal action against drug peddlers and kingpins.”

Sarma, who believes the trade in his state is worth hundreds of millions of dollars, said he was unable to speak with Reuters for this story right away.

In the past three months, police in Assam have arrested 1,783 people, killed two, wounded five, and seized drugs worth tens of millions of dollars, according to data shared by the state’s police.

Assam is the only point of exit for drugs smuggled into India from Myanmar, said the state’s special director general of police Gyanendra Pratap Singh.

“No crime can ever be stopped, but our goal is to ensure that we make it as difficult as lawfully possible for anybody to carry drugs through Assam, and make the availability of drugs to the youngsters of Assam almost impossible,” he told Reuters at his residence secured by many young policemen.

Singh, who is also leading an investigation into the deadly July clashes with Mizoram, said a nexus that facilitates the passage of drugs through Mizoram had a role in the violence to divert attention from the fight on narcotics.

Mizoram has refuted the charge, claiming that it had made record methamphetamine seizures this year. It has also protested to Assam’s new policy of screening all vehicles entering the state from Mizoram in order to “combat illicit narcotics trade.”

“We support the war on narcotics because they are a threat to society,” said David Lalthangliana, a special duty officer with the Mizoram Home Department. “But make it a collaborative effort; don’t make it discriminatory by simply checking automobiles coming in from one state.”

Opposition leaders in Assam have also accused the state government of human rights violations in dealing with criminals, including drug peddlers, and have demanded a judicial enquiry into police encounters that have killed or injured suspects. Police say shots are only fired in self defence or when suspects try to flee.