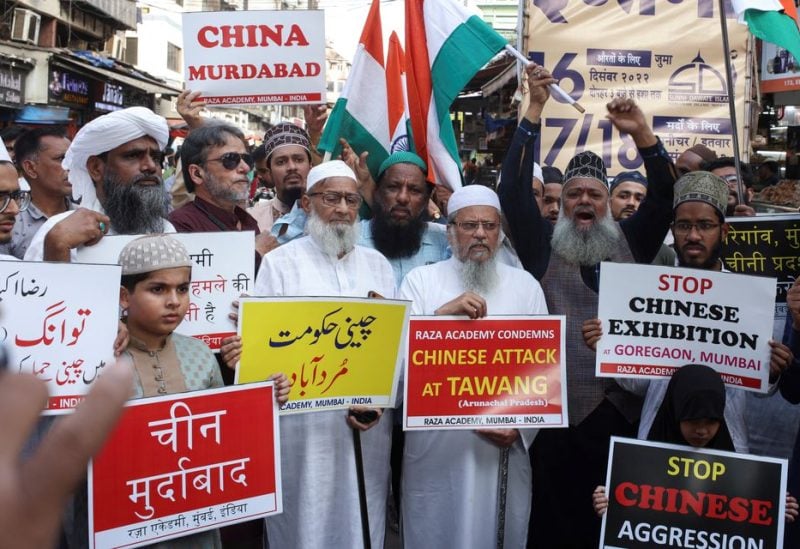 Demonstrators hold signs during a protest against China, following a border scuffle at the Tawang sector of India's northeastern Himalayan state of Arunachal Pradesh that led to injuries to soldiers on both sides, in Mumbai, India, December 13, 2022 - REUTERS

In the first border skirmish between the Asian superpowers since 2020, Indian troops stopped Chinese soldiers from entering Indian territory on December 9 during a border skirmish that resulted in injuries on both sides, according to India’s defense minister on Tuesday.

The incident took place in the Tawang region of the northeastern Indian Himalayan state of Arunachal Pradesh, which Beijing also claims and borders China’s south.

The Indian troops “illegally crossed the line to block” a routine patrol of Chinese border troops, a spokesperson from the Western Theatre Command of China’s People’s Liberation Army (PLA) said on Tuesday.

“We urge the Indian side to strictly control and restrain the front-line troops, and work with China to maintain peace and security on the border,” the spokesperson said.

An Indian defense source told Reuters that patrolling teams from both sides came face-to-face at one of the peaks there and that in an ensuing hand-to-hand fight, some soldiers fell on the rocky surface and injured themselves. Two other sources said around half a dozen Indian soldiers suffered minor injuries.

According to the defense source, because of the unmarked Line of Actual Control (LAC), soldiers from both sides occasionally enter each other’s area. At order to prevent further escalation, such events are then brought up in flag meetings.

At a press conference, Wang Wenbin, a spokesperson for China’s foreign ministry, stated that the situation at the border was “mostly steady.”

The foreign minister of India has stated that without border tranquility, relations with China cannot return to normal. In spite of an increase in imports from China over the past two years, India has increased scrutiny of many Chinese businesses doing business there.

The fighting was the first between the two nations since the fatal skirmishes in June 2020, when Chinese and Indian troops engaged in hand-to-hand combat in the Galwan Valley in Ladakh, which is next to the Tibetan plateau controlled by China.

Twenty Indian soldiers and four Chinese soldiers died as a result of the incident.

Regarding the most recent tension, minister Singh said, “The Chinese side was requested to cease from such acts and maintain peace and tranquility along the border.” Through diplomatic channels, the problem has also been raised with China.

Prior to the hostilities two years ago, the undefined 3,800 km (2,360 mile) border between the two nuclear-armed Asian superpowers had generally remained calm since a war in 1962.