India uses some mosques as wards amid health crisis 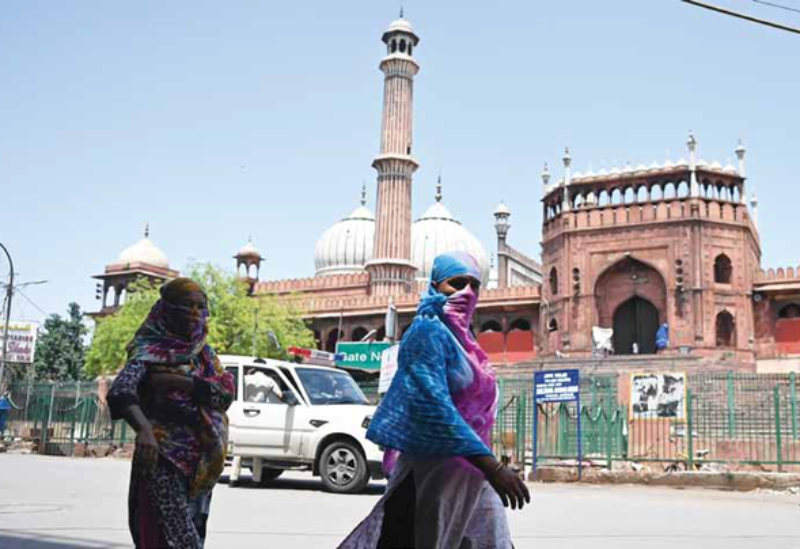 On Tuesday, India reported 323,144 new infections for a total of more than 17.6 million cases, behind only the US. India’s Health Ministry also reported another 2,771 deaths in the past 24 hours, with 115 Indians succumbing to the disease every hour. Experts say those figures are likely an undercount.

The number of infections has doubled in the past 13 days as several states continue to suffer from an acute shortage of beds and medical oxygen supply at hospitals.

To deal with the uptick in numbers, Muslim groups have converted mosques into COVID-19 care facilities, like the Jahangirpura mosque in the western state of Gujarat’s Vadodara city. It was transformed into a 50-bed facility to treat patients suffering from the virus.

“The COVID-19 situation in the city is not good and people are not getting beds in hospitals, so we decided to open the facility to provide relief to the people,” Irfan Sheikh, trustee of the mosque, told Arab News.

“Within days of opening the facility, all 50 beds were occupied so you can imagine what kind of pressure the hospitals are under.”

Sheikh said the facility could add 50 more beds if the oxygen supply was dependable.

Gujarat, the home state of Prime Minister Narendra Modi, is one of the worst affected states in India. It reported close to 1,500 cases and more than 150 deaths on Tuesday.

Other major cities also witnessed chaotic scenes at hospitals while dozens of ambulances waited in queues for hours outside the facilities.

“We are facing difficulties in oxygen supply and the mosque has opened its space to serve the suffering humanity,” Sheikh said.

The Darool Uloom mosque in the same city also opened its doors to 142 beds fitted with oxygen as 20 nurses and three doctors are on site.

“We can make 1,000-bed COVID-19 facilities, but the oxygen supply is a constraint,” Ashfaq Malek Tandalja, a member of the mosque’s managing committee, told Arab News.

Individuals such as Pyare Khan, of Nagpur, a city in the western state of Maharashtra, have come forward to help India emerge from the health crisis, too.

Khan, a billionaire transporter, reportedly spent close to SR506,271 ($135,000) to deliver 400 metric tons of medical liquid oxygen to government hospitals in and around the city when the crisis started.

“My city was in trouble and I had resources, so I mobilized cryogenic tankers and oxygen from different parts of the country to support the city,” Khan told Arab News.

“Religion teaches us to be compassionate. I thought I must support people in this hour of crisis.”

Khan also urged others to make use of their resources.

“A shroud does not have a pocket,” he said. “We leave everything behind when we die.”

Maharashtra is the worst affected state in India as it reported 65,000 cases and 500 deaths every day over the past week. Its capital of Mumbai, home to the globally famous Hindi Film Industry and Bollywood, is overwhelmed with critical cases.

To address the crisis, Shahnawaz Sheikh and his team of 20 volunteers have worked tirelessly to support the needy while establishing a “COVID-19 war room” where volunteers resolve issues on calls.

“We help people get hospital beds, oxygen supply if they need it and also support their family with our own resources,” he told Arab News.

Last year, Shahnawaz said he sold his personal SUV to raise money for oxygen cylinders in the city, which helped hundreds of people.

“This time, the intensity of the wave is very high and we are overwhelmed with calls. Every day we receive 500 distress calls and we try to address as many as possible,” the 32-year-old contractor said.

Shahnawaz said his team has faced a resource crunch because many of the people who donated last year have fallen ill or had families suffering.

“We will really appreciate any support,” he said.

On Monday, Chief of Defence Staff General Bipin Rawat met with PM Modi and recalled medical personnel from the armed forces who had retired in the past two years to help facilitate health workers in the country.

The World Health Organization (WHO) said it would send help to India as well.

“The situation in India is beyond heart-breaking,” WHO chief Tedros Adhanom Ghebreyesus said. “WHO is doing everything it can. It is providing critical equipment and supplies, including thousands of oxygen concentrators, prefabricated mobile field hospitals and laboratory supplies.”