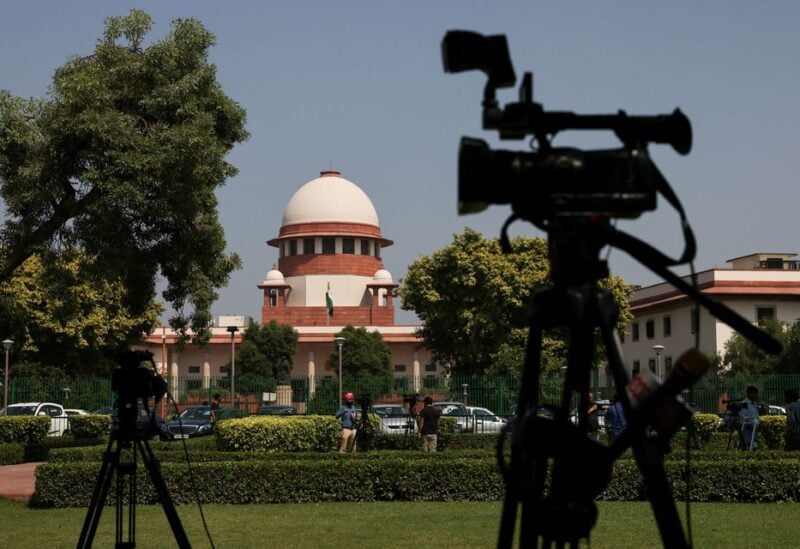 Members of media speak in front of cameras after a panel of the Supreme Court said it was divided on a decision to allow hijabs in classrooms, outside the premises of the court in New Delhi, India October 13, 2022. REUTERS/Anushree Fadnavis

An Indian Supreme Court panel said on Thursday that it was divided on a ban on hijabs in schools and referred the case to the chief justice, effectively upholding a state ruling that has sparked outrage.

In February, Muslim students and their parents protested the state of Karnataka’s ban on the garment in schools.

In response, Hindu students staged counter protests, adding to religious tensions at a time when some Muslims have complained of marginalisation under a Hindu nationalist government led by Prime Minister Narendra Modi.

India’s debate on the hijab comes as protests have rocked Iran after women objected to dress codes under its Islamic laws.

“We have a divergence of opinion,” said Supreme Court Justice Hemant Gupta, one of two judges on the panel.

Gupta said he had wanted an appeal against the ban to be quashed while his colleague on the panel, Sudhanshu Dhulia, said wearing the hijab was a “matter of choice”.

The chief justice would set up a larger bench to further consider the case, they said, but did not say by when that could happen. Supreme Court decisions apply nationwide.

Anas Tanwir, a lawyer for one of the Muslim petitioners who appealed against the Karnataka ban, told Reuters the split verdict was a “semi-victory” for them.

“Hopefully, the chief justice will set up the larger bench soon and we will have a definitive verdict,” he said by telephone.

Muslims are the biggest minority group in India, accounting for 13% of the population of 1.4 billion, the majority of whom are Hindu.

The lack of a verdict disappointed some Muslim students in the town of Udipi, where protests first erupted.

“I have decided to stop going to college and will complete the rest of my education by correspondence,” Ayesha Imthiaz, a 20-year-old student who is in the second year of a three-year degree told Reuters by phone.

Imthiaz was not one of the petitioners in the case, but said she had been following the case closely.

At least five of her Muslim friends had stopped attending college after the hijab ban was implemented, she said.

“I am not hopeful that the ban will ever be over-turned,”Imthiaz said.

Critics of the ban say it is another way of marginalising the Muslim community, adding that Modi’s Bharatiya Janata Party (BJP), which rules Karnataka, could benefit from the controversy ahead of a state election due by May next year.

The BJP, which draws its support mainly from Hindus, says the ban has no political motive.