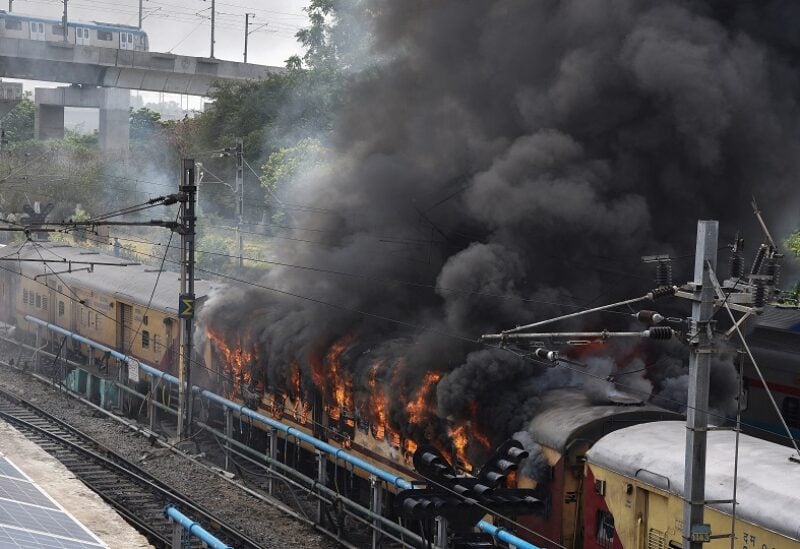 Smoke billows out from a passenger train coach after it was set on fire by protestors during a protest against "Agnipath scheme" for recruiting personnel for armed forces, in Secunderabad in the southern state of Andhra Pradesh, India, June 17, 2022. REUTERS/Stringer NO ARCHIVES. NO RESALES

Amid demonstrations against a new military recruitment process raged for a second day, Protesters in India threw stones at police and set fire to train coaches on Friday, police said.
Prime Minister Narendra Modi’s government announced this week an overhaul of the recruitment process for the 1.38 million-strong armed forces, aiming to bring in more people on short, four-year contracts to lower the average age of personnel.
But many potential recruits object, saying they should be allowed to serve longer than four years. Opposition parties and some members of Modi’s ruling Bharatiya Janata Party say the system will lead to more unemployment in a country grappling with joblessness.
Police fired shots in the air on Thursday to push back stone-throwing crowds in the northern sate of Haryana. Protesters gathered again on Friday, torching train coaches in at least two stations in the eastern state of Bihar and disrupted rail services, police said.
“They have blocked trains in 10 places today,” Sanjay Singh, a senior police official in Bihar, told Reuters, adding that more than 100 people had been arrested in protests across the state on Thursday.
Hundreds of people also gathered in the southern city of Secunderabad to throw stones at police, in a sign that the protests were spreading.
“They have also set fire to properties at Secunderabad railway station,” police official A.R Srinivas said.
The new recruitment system, called Agnipath or “path of fire” in Hindi, will bring in men and women between the ages of 17-and-a-half and 21 for a four-year tenure at non-officer ranks, with only a quarter retained for longer periods.
Soldiers have previously been recruited by the army, navy and air force separately, and typically serve for up to 17 years, for the lowest ranks.
The government on Friday also announced a one-time extension for the maximum entry age into the scheme to 23 since recruitment had been frozen for the past two years, mainly because of the COVID-19 pandemic.
“The government has decided that a one-time waiver shall be granted for the proposed recruitment cycle for 2022,” the defense ministry said in a statement.
The armed forces aim to recruit about 46,000 people under the new system this year.