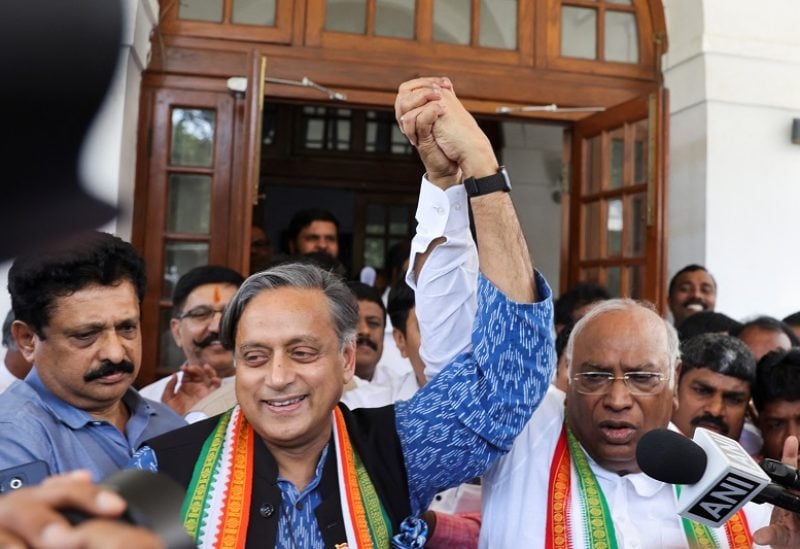 In a contest in which the Nehru-Gandhi family, which has led the party for more than two decades, did not compete, India’s main opposition Congress party elected Mallikarjun Kharge as its new president on Wednesday.
The party has struggled to regain support since being routed by Prime Minister Narendra Modi’s Bharatiya Janata Party in 2014.
Kharge, 80, from the southern state of Karnataka, was backed by the party’s top leaders. His challenger, Shashi Tharoor, 66, spent nearly 30 years at the United Nations before joining the Congress party in 2009.
Kharge received more than 80 percent of the votes, local media reported.
Interim party President Sonia Gandhi and her son, Rahul Gandhi, announced last month that no one from the family would seek the party’s leadership at this time.
Their decision to bring in a new leader ahead of key upcoming elections reflects the party’s need to shed its image as a family dynasty, analysts said. Since Modi came to power, the Congress has suffered crushing defeats in a slew of national and state polls. Rahul Gandhi resigned as party president after dismal results in 2019 national elections.
Kharge was seen as the favorite of the Nehru-Gandhi family, while Tharoor emerged as an outsider rallying for change within the party.
“At least it’s not someone from the family, but you can’t expect such a strong presence of the Gandhi family to just go away — their presence will continue to be at the center,” said Mahesh Rangarajan, a professor at Ashoka University.
Both the family and the party are at a pivotal moment, he added, as they face their most formidable competition yet from Modi’s governing party. “The question is can they turn the tide? How will the party rediscover its message? That is the real challenge,” Rangarajan said.
Tharoor complained earlier to the party’s election authority that the contest was unfair because some senior party leaders had urged delegates to vote for Kharge. But on Wednesday, Tharoor congratulated Kharge after the results were declared. “It is great honor, huge responsibility to be president of Congress. I wish Mallikarjun Kharge all success in that task,” the Press Trust of India news agency quoted him as saying.
The party has been led by non-family members in the past, but Sonia Gandhi and Rahul Gandhi had been at its helm since 1998.
Modi has regularly denounced the Congress party’s family dynasty.
The family has produced three of India’s 15 prime ministers since independence, starting with Rahul Gandhi’s great-grandfather, Jawaharlal Nehru, who was the country’s first. Two of them — his grandmother, Indira Gandhi, and father, Rajiv Gandhi — were assassinated. The party governed India for more than 60 years after India gained independence from British colonialism in 1947.
Rahul Gandhi is on a 3,500-kilometer walking tour of Indian cities, towns and villages over the next four months as he attempts to rejuvenate the party and win the people’s support ahead of elections in Himachal Pradesh state and Modi’s home state of Gujarat. The results are likely to impact the country’s next national elections, due in 2024.