Indonesia policemen on trial for negligence over deadly soccer stampede 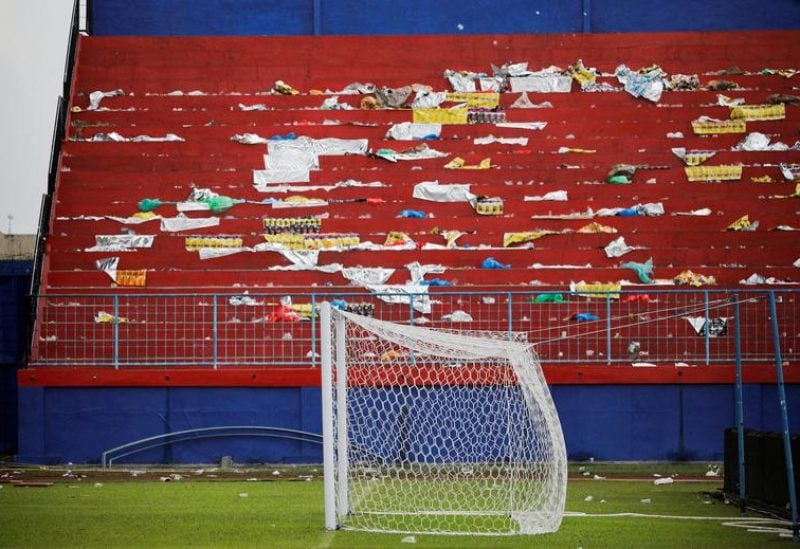 A goalpost is seen after a riot and stampede following soccer match between Arema vs Persebaya at Kanjuruhan stadium in Malang, East Java province, Indonesia, October 2, 2022. REUTERS/Willy Kurniawan

An Indonesian court began the trial of a handful of police officers and match officials charged with negligence in connection with their alleged roles in one of the world’s deadliest soccer stadium stampedes last year.

The disaster, which killed 135 people, occurred during a match in October at the Kanjuruhan stadium in Malang, East Java, and raised widespread concerns about safety standards and the use of tear gas, a crowd-control measure prohibited by FIFA, soccer’s global governing body.

The court in Surabaya on Monday heard the charges against three police officers, a security official and a match organiser, who each face a maximum prison sentence of five years if convicted.

The trial is being held via teleconference due to security concerns, said court spokesperson Agung Pranata.

Indonesia’s human rights commission, which conducted an investigation into the stampede last November, found police fired 45 rounds of tear gas into the crowd at the end of the match, causing panic that led to the stampede.

Investigators concluded that excessive and indiscriminate use of tear gas was the main cause of the crush.

A lawyer for the match organiser from Arema, one of the clubs involved in the match, said his client denied all charges.

“If there is negligence it should be on the police, who fired the tear gas, not us,” said Sudarman, the lawyer.

Lawyers for the police and security officers on trial were not immediately available for comment.

Rini Hanifah, whose son died in the stampede and who attended Thursday’s trial, called for harsh punishment.

“My son and all the dead victims are innocent, they were just going there for fun” said Rini.

“I am very disappointed…. I had hoped for the death penalty for all five defendants.”

Indonesian President Joko Widodo after the incident announced that all league matches would be suspended and that Kanjuruhan stadium would be demolished and rebuilt.

League games have since resumed but without spectators.