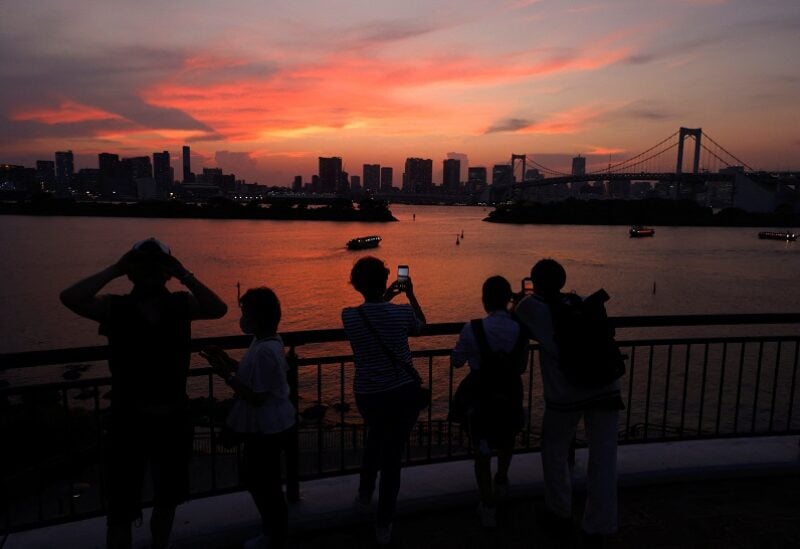 People cool off on an observation bridge at dusk as the region around Tokyo marked its seventh straight day of temperatures above 35 Celsius (95 Fahrenheit) and faces a hot weekend, at Odaiba Marine Park in Tokyo, Japan, July 1, 2022. REUTERS/Issei Kato

For the first time in the country’s history, Japan experienced temperatures above 35 Degree Celsius for six days in a row during June, according to the national Meteorological Agency,
The month of June generally brings rain in Japan but this year, the heatwave has changed everything, and official data stated that in the first week of July, almost 14,000 people had to be hospitalised. As the situation continues to get worse, two Japanese insurance companies have decided to cover the medical expenses for people suffering from the heatwave in the country
Sompo Holdings and Sumitomo Life Insurance have officially decided to include heatwave cover in their insurances, and it will be covering both hospitalisation and other costs incurred.
“These policies are not meant to be profitable, but they could be good ‘door openers’ to tap into clients that don’t have much insurance or are curious about it,” Intelligence analyst Steven Lam told Bloomberg. “If the whole claims experience is good, that might lead into other sales opportunities.”

The policies have become quite popular among the Japanese consumers as the Sumitomo Life package found 6900 buyers on June 29, according to Bloomberg. On the other hand, Yomiuri Shimbun has reported selling the insurance cover to around 400 people every day in July.

The other feature of the insurance policies that made it popular among the people was the lack of an age cap. While the initial plan was to include just senior citizens in the coverage, the companies decided to not include any age restrictions.