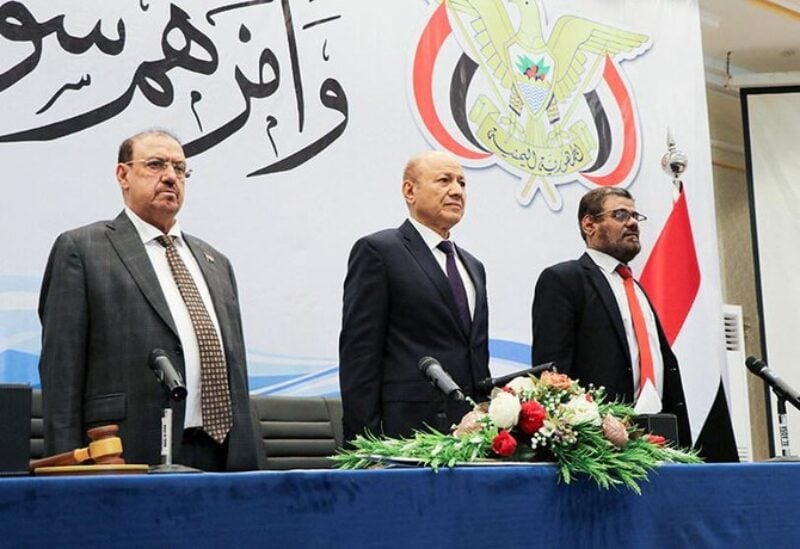 Chairman of the Presidential Leadership Council Rashad Al-Alimi, center, during a session of the Yemeni parliament. (Reuters)

Providing that the UN and its envoy to Yemen gave assurances that the Iran-backed Houthis would fully implement the terms of the truce, including ending their siege on Taiz, Yemen’s Presidential Leadership Council would renew the UN-brokered truce.

During a meeting in Aden on Wednesday with a number of EU ambassadors to Yemen, Rashad Al-Alimi, the council’s president, said the world, mainly the UN, should mount more pressure on the Houthis to open roads in Taiz, pay government employees in areas under their control, release thousands of detainees and forcibly disappeared civilians from their prisons and not turn civilian facilities into military sites.

The Yemeni leader said the Houthis’ reluctance to lift the siege on Taiz and their continuing violations of the truce show that they are not serious about extending the truce and alleviating the suffering of Yemenis, signaling to effectuate military operations if the Houthis refuse to comply with peace efforts to end the war.

While the council has maintained its wish for peaceful solutions, “it is a council of determination and strength to deter any escalation by the Iran-backed Houthi militia,” Al-Alimi was quoted as telling the EU envoys, according to the official news agency SABA.

The EU ambassadors’ visit to Aden came as international forces exert last-ditch attempts to convince the Houthis and the Yemeni government to extend the truce, which expires on Thursday.

Al-Alimi also met in Aden with the new US Ambassador to Yemen Steven Fagin and US Special Envoy for Yemen Tim Lenderking, who also floated the idea of renewing the truce.

Al-Alimi told the American diplomats that the ball is in the Houthis’ court after his government put into action all of his commitments under the truce, adding that 70 people have been killed by the Houthis since the beginning of the truce.

UN Secretary-General Antonio Guterres called the Yemeni president to discuss the renewal of the truce, the implementation of all its components and the security situation in Yemen.

SABA reported that Al-Alimi expressed his support for the UN efforts to achieve peace in Yemen and alleviate the suffering of Yemenis, stressing that his government facilitated the resumption of commercial flights from Sanaa and fuel ships to Hodeidah port, even as the Houthis refused to lift the siege on Taiz.

The agency said the UN chief “promised” to push the Houthis into opening roads in Taiz and creating the conditions necessary to reach a deal that would end the war.

In New York, the UN said that Guterres discussed with the council president political and security developments in Yemen, the positive impact of the truce on alleviating the humanitarian crisis in Yemen and the need to renew and fully implement the truce.

UN Special Envoy for Yemen Hans Grundberg on Tuesday discussed with the Houthis and Omani officials extending the truce and opening roads in Taiz.

In a boost to the truce, a Yemenia flight carrying 78 passengers on Wednesday left the Houthi-controlled Sanaa airport to Cairo for the first time in six years, the Houthi media said.