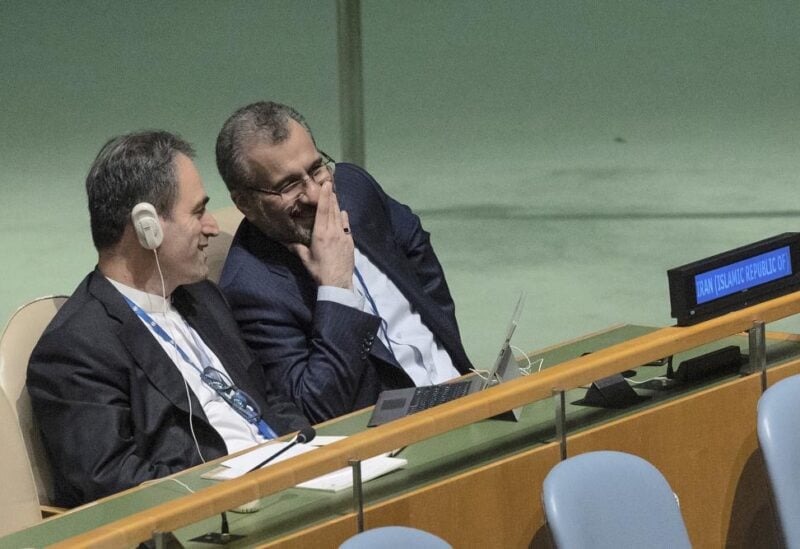 The Biden administration is having new difficulties negotiating a return to the 2015 nuclear deal with Iran as a result of the attack on author Salman Rushdie last week and the arrest of an Iranian person for planning to kill former national security adviser John Bolton.

However, as the United States and Europe consider Iran’s most recent answer to what is being referred to as the West’s final offer, the EU proposal, the administration is now confronted with new and possibly insurmountable domestic political obstacles.

Deal critics in Congress who have long vowed to blow up any pact have ratcheted up their opposition to negotiations with a country whose leadership has refused to rescind the death threats against Rushdie or Bolton. Iran also vows to avenge the Trump administration’s 2020 assassination of a top Iranian general by killing former Secretary of State Mike Pompeo and Iran envoy Brian Hook, both of whom remain under 24/7 taxpayer-paid security protection.

Although such threats are not covered by the deal, which relates solely to Iran’s nuclear program, they underscore deal opponents’ arguments that Iran cannot be trusted with the billions of dollars in sanctions relief it will receive if and when it and the U.S. return to the Joint Comprehensive Plan of Action, or JCPOA, a signature foreign policy accomplishment of the Obama administration that President Donald Trump withdrew from in 2018.

“This is a tougher deal to sell than the 2015 deal in that this time around there are no illusions that it will serve to moderate Iranian behavior or lead to greater U.S.-Iran cooperation,” said Karim Sadjadpour, an Iran expert at the Carnegie Endowment for International Peace.

“The Iranian government stands to get tens of billions in sanctions relief, and the organizing principle of the regime will continue to be opposition to the United States and violence against its critics, both at home and abroad,” he said.

Iran has denied any link with Rushdie’s alleged attacker, an American citizen who was indicted for attempted murder and has pleaded not guilty in the Aug. 12 stabbing at a literary event in Western New York. But Iranian state media have celebrated Iran’s long-standing antipathy toward Rushdie since the 1988 publication of his book “The Satanic Verses,” which some believe is insulting to Islam.

Media linked to Iran’s leadership have lauded the attacker for following through on a 1989 decree, or fatwa, calling for Rushdie to be killed that was signed by Iran’s then-Supreme Leader Ayatollah Ruhollah Khomeini.

And the man who was charged with plotting to murder Bolton is a member of Iran’s Revolutionary Guard Corps. The Justice Department alleges the IRGC tried to pay $300,000 to people in the United States to avenge the death of Qassam Suleimani, the head of its elite Quds Force who was killed by a U.S. airstrike in Iraq in 2020.

“I think it’s delusional to believe that a regime that you’re about to enter into a significant arms control agreement with can be depended on to comply with its obligations or is even serious about the negotiation when it’s plotting the assassination of high-level former government officials and current government officials,” Bolton told reporters Wednesday.

“It certainly looks like the attack on Salman Rushdie had a Revolutionary Guard component,” Bolton said. “We’ve got to stop this artificial division when dealing with the government of Iran between its nuclear activities on the one hand and its terrorist activities on the other.”

“Granting terrorism sanctions relief amid ongoing terror plots on U.S. soil is somewhere between outrageous and lunacy,” said Rich Goldberg, a former Trump administration national security council staffer and longtime deal critic who is now a senior fellow at the Foundation for Defense of Democracies, which has also lobbied against a return to the JCPOA.

While acknowledging the seriousness of the plots, administration officials contend that they are unrelated to the nuclear issue and do nothing to change their long-held belief that an Iran with a nuclear weapon would be more dangerous and less constrained than an Iran without one.

“The JCPOA is about the single, central challenge we face with Iran, the core challenge, what would be the most threatening challenge we could possibly face from Iran, and that is a nuclear weapon,” State Department spokesman Ned Price said this week. “There is no doubt that a nuclear-armed Iran would feel an even greater degree of impunity, and would pose an even greater threat, a far greater threat, to countries in the region and potentially well beyond.”

“Every challenge we face with Iran, whether it is its support for proxies, its support for terrorist groups, its ballistic missiles program, its malign cyber activities — every single one of those — would be more difficult to confront were Iran to have a nuclear weapons program,” he said.

That argument, however, will be challenged in Congress by lawmakers who opposed the 2015 deal, saying it gave Iran a path to develop nuclear weapons by time-limiting the most onerous restrictions on its nuclear activities. They say there’s now even more tangible evidence that Iran’s malign behavior make it impossible to deal with.

Two of the most outspoken critics of the deal, Republican senators Ted Cruz of Texas and Tom Cotton of Arkansas, have weighed in on what the Rushdie attack should mean for the administration.

“The ayatollahs have been trying to murder Salman Rushdie for decades,” Cruz said. “Their incitement and their contacts with this terrorist resulted in an attack. This vicious terrorist attack needs to be completely condemned. The Biden administration must finally cease appeasing the Iranian regime.”

“Iran’s leaders have been calling for the murder of Salman Rushdie for decades,” said Cotton. “We know they’re trying to assassinate American officials today. Biden needs to immediately end negotiations with this terrorist regime.”

Under the Iran Nuclear Agreement Review Act, or INARA, the administration must submit any agreement with Iran for congressional review within five days of it being sealed. That begins a 30-day review period during which lawmakers may weigh in and no sanctions relief can be offered.

That timeline means that even if a deal is reached within the next week, the administration will not be able to start moving on sanctions relief until the end of September, just a month from crucial congressional midterm elections. And, it will take additional time for Iran to begin seeing the benefits of such relief because of logistical constraints.

While deal critics in the current Congress are unlikely to be able to kill a deal, if Republicans win back control of Congress in the midterms, they may be able to nullify any sanctions relief.

“Even if Iran accepts President Biden’s full capitulation and agrees to reenter the Iran nuclear deal, Congress will never vote to remove sanctions,” the GOP minority on the House Armed Services Committee said in a tweet on Wednesday. “In fact, Republicans in Congress will work to strengthen sanctions against Iran.”