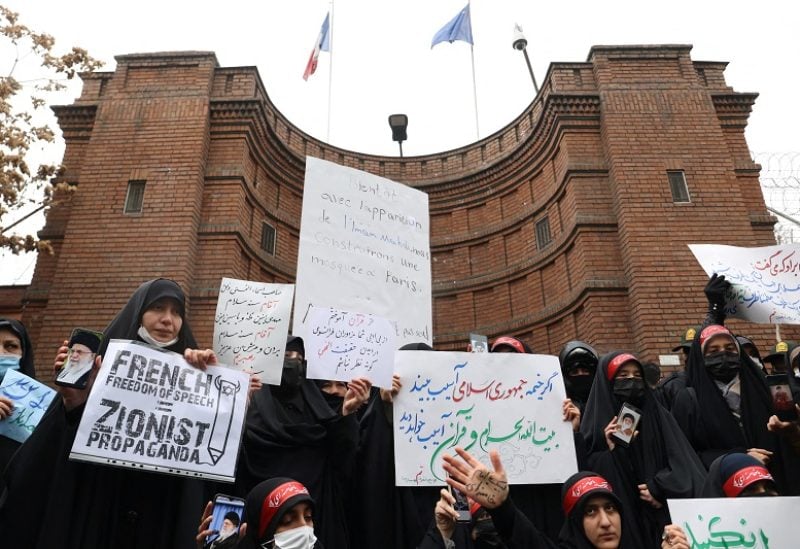 After the French Foreign Ministry on Tuesday said, that it was considering the idea that the European Union label Iran’s IRGC as a terrorist organization, tensions between Iran and France are on the boil over the publication of caricatures of the Iranian supreme leader, with the country’s top general warning of revenge.

Many Iranian officials, including the president, foreign minister, top military commanders and senior parliamentarians, have issued statements criticizing the magazine and the French government.

There have also been a series of demonstrations in front of the French Embassy in Tehran in recent days amid growing calls to review diplomatic ties with France.

In the most scathing reaction to the publication of the cartoons, which were part of a competition announced by the magazine last month, the chief of Iran’s Islamic Revolutionary Guard Corps (IRGC) on Tuesday said Muslims will “sooner or later” exact revenge against Charlie Hebdo.

Maj. Gen. Hossein Salami, speaking at an event in south-eastern Iran’s Zahedan city, asked the owners of Charlie Hebdo magazine to “look into the fate of Salman Rushdie”.

Rushdie was attacked during an event in New York on August 12 last year, almost 33 years after Iran’s then-Supreme Leader Ayatollah Khomeini issued a fatwa (decree) against him for his controversial novel “The Satanic Verses” published in 1988.

The IRGC commander said the French satirical magazine, which has previously been involved in controversy over the publication of cartoons of Islam’s Prophet Muhammad, made a “big mistake” by publishing Khamenei’s caricatures and will see the revenge.

“Do not play with (the sentiments of) Muslims,” Salami said. “Salman Rushdie insulted the Quran and the Holy Prophet of Islam 30 years ago and went into hiding.”

“After several years, a young Muslim man bravely took revenge on Salman Rushdie and no one could save him,” he added.

The IRGC general, however, didn’t explain the nature of “revenge” against the French magazine.

The cartoons featuring Ayatollah Khamenei were published days before the 8th anniversary of a terrorist attack on Charlie Hebdo headquarters in January 2015, which killed 17 people.

“The insulting and indecent act of a French publication in publishing cartoons against the religious and political authority will not go without a decisive and effective response,” he wrote on Twitter.

The Foreign Ministry also announced a decision to review France’s cultural activities in Iran and the closure of the decades-old French research center as the “first step”.

French Ambassador to Tehran Nicolas Roche was summoned to the ministry last Wednesday and told that Iran does not tolerate insults to its sanctities.

“France has no right to justify insults to sanctities of other countries and Muslim nations under the pretext of freedom of expression,” ministry spokesman Nasser Kanaani said in a statement.

In response to Iran’s decision to shut down the French Institute for Research, which operates under the French Embassy in Tehran, Foreign Ministry spokeswoman Anne-Claire Legendre said in a statement last week that it was “clearly regrettable if confirmed”.

It came a day after German Foreign Minister Annalena Baerbock on Monday said a new round of sanctions against Iran would not be enough, backing the move to designate the IRGC.

“Listing the Revolutionary Guard as a terrorist organization is politically important and makes sense,” she wrote on Twitter, while also referring to legal obstacles.

Paris, which has been reluctant to endorse the move so far, appears to be changing its stance amid rising tensions with Tehran over the Charlie Hebdo caricatures controversy and the arrest of some French nationals in Iran on charges of espionage in recent months.

Earlier this month, Iran’s judiciary issued indictments against two more French nationals arrested on charges of “espionage, gathering, and collusion” against the country’s internal security, taking the total number of French detainees in Iran to seven as per French officials.

“Given the continuation of this repression, France is working with its European partners on new sanctions’ measures, without excluding any,” Legendre said on the designation of IRGC.

Iran has previously warned that designating the IRGC as a terrorist organization would be a “completely illegal” move as it is the official military branch of the Iranian government.